Featured
articles
Different looks towards the past: Discriminatory Nationalism
Learning to read the past in a serene and balanced way is a challenge.

History is full of discriminatory nationalism that has led to contempt towards millions of beings simply because they do not belong to a nation itself. 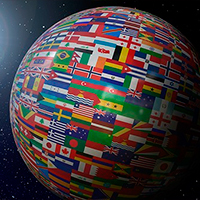 Learning to read the past in a serene and balanced way is a challenge.
Different looks towards the past: discriminatory nationalisms

History is full of discriminatory nationalism that has led to contempt towards millions of beings simply because they do not belong to a nation itself.
By: P. Fernando Pascual | Source: Catholic.net

Often, we humans, analyze the past. We do this from different perspectives, with greater or lesser competition, depending on deforming prejudices or from apparently serious angles.

When analyzing the past, it is easy to incur in one of these two possible opposing looks. The first recognizes mostly positive elements in previous times. The second designates and denounces especially negative elements, errors, and harmful behaviors.

Between the first look and the second one, everything gives closer analysis to one or the other. Some recognize that they are almost always mixed, as in everything human, positive and negative aspects.

Looking correctly at the past is difficult. Partly because data is missing. In part because there are many distorted interpretations. In part, because oneself can be marked by prejudices of different type.

In a world where reductive simplifications abound, learning to read the past in a serene and balanced way is a challenge. It is a challenge that, if it is well taken, it will avoid the risks of distorted looks, and will allow better-oriented studies.

Two reductive looks towards the past oppose each other radically. What we do to separate ourselves from both and to reach an objective and dispassionate point of view will allow a fuller reading of the facts that preceded us, and will help to better understand the inheritance that has left us the past, with its shadows and its lights.

Facing, for example, the issue of nationalism is not easy, because the very idea of a nation is complex, and because with the word nationalism one and the others come to understand quite different things, even opposed.

To delimit these notes, we are going to look at a kind of nationalism, which is characterized by exalting all that is considered own of the "nation" itself, and by fomenting negative judgments on other "nations". It would be treated, if the name seems appropriate, of discriminatory nationalism.

Discriminatory nationalism is built on praises for "our" and reproaches towards "their"; on a strong adherence to one's identity and about contempt for other realities.

This nationalism encloses serious dangers because it is built according to a discriminatory mentality, which easily leads to error or lie. Therefore it is easy to systematically hide what can be seen as negative in the past or the own present, and sometimes even invents, anything that can be presented as positive.

Discriminatory nationalism is thus characterized by a wrong and unfair premise. Because neither the people nor the facts become positive by arising in the nation itself; and because the foreign does not deserve to be labeled as inferior and negative simply because it has its origin in the foreign and different.

Facing discriminatory nationalism, there are positive and mature ways of evaluating the nation itself. For example, when the past is analyzed objectively and serenely, without manipulations. Or when you look at other cultural and national realities with the balance of the one who respects the good in any group.

Human history is tinged with obscure pages arising from discriminatory nationalism that has led to contempt and hatred for millions of human beings simply because they do not belong to the nation itself.

In reverse, human history writes its best pages there where, beyond the traits that distinguish the nation itself, people have a heart and a mind open to any human being, wherever it may be, speak the language that speaks, simply because it is part of the same family of societies.