How to admire some art 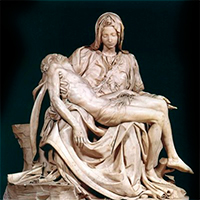 There are 2,400 new LED lights, but they are not to dazzle but to illuminate with the same intensity with which Raphael painted these rooms in the 16th century.

The challenge was great because it involved trying to reproduce the light conditions of the same sun artificially to provoke the experience of enjoying these paintings the closest to the exact moment they were painted.

Lighting project responsible
"We set ourselves as objective to reproduce natural light artificially. Therefore, the great challenge has been to reproduce the sun’s chromatic scheme or at least the closest to the sun so that it resembles the conditions with which Raphael painted the frescoes".

Thanks to this new light that bathes the famous rooms you can now see the masterpiece of Raphael, the School of Athens, one of the most famous frescoes in the History of Art that the Italian painter made with just over 25 years of age.

It was a commission of Pope Julius II who wanted to decorate the Stanza Della Segnatura, which would be his library.

The School of Athens is the fresco that attracts all eyes for its innovative composition and extraordinary perspective. Here Raphael wanted to translate the whole History of Philosophy. At the center, Plato and Aristotle settle their philosophical differences among other great thinkers.

After seeing the Sistine Chapel, Raphael included this character that has the face of Michelangelo. He is Heraclitus, the philosopher. The artist also included himself in his portrait. He is one of the few characters who interpellates the spectator with his gaze.

In front of Philosophy, Raphael placed Theology in this other frescoes, "the dispute of the Sacrament" which was, in fact, the first of the frescoes he painted.

Now the visitor can enjoy them with the same light with which Raphael wanted them as if the paint was still fresh on these walls.