Featured
articles
Live and let live?
We live overturned in the present moment, which must be profited without having to ask ourselves disturbing questions. 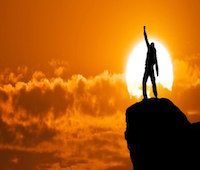 Answers to this current phrase
Live and let live?


We live overturned in the present moment, which must be profited without having to ask ourselves disturbing questions.

Each historical time has been marked by an imprint that translated into a certain attitude to life. With thick strokes we could characterize the medieval man as a person who had his feet on the Earth lived with his eyes on the sky, which allowed him to see the fleeting events in the light of a transcendence that ended up giving meaning to his life, having come to the conviction that the down here passes and only the top remains. "La Fuga Mundi" so frequent in the Middle Ages was a consequence of the dialectical struggle maintained between the transient and the permanent. If, as it was thought then, life is only a fleeting transit to eternity, a bad night in a bad inn, which would say, Teresa of Avila, then it is more than any diligence in finding a comfortable accommodation to the present existence. The key to all was to know that living is over soon and all that remained was to have worked well. From this point of view it is easy to understand why earthly aspirations were postponed to the extent of being able to say; die first to be able to live later and such could be the motto of this historical period, imbued with religiosity.

On the contrary, the men of the Renaissance and Modernity were restless spirits, bent on discovering and enjoying the secrets of nature and art to achieve happiness, which could come through the progress or enjoyment of beauty. The cravings for happiness below were considered legitimate and responded to an impulse of nature that was to be taken into account. It was thought that the heartbeat of the human heart could not be suffocated without a serious risk of dehumanization. The men and women of the Renaissance and the Enlightenment learned to understand that the body and soul were fellow travelers and that they were doomed to understand each other. This brilliant epoch of history found its reason to be in an optimistic attitude, which prompted the search for universal happiness under the suspicion that everything was possible. Its great ideal was to become the owner of nature through reason and its motto could be to win the future for humanity at all costs.

Times have changed and today things look different. The sense of medieval transcendence has been lost and the futuristic optimism of modernism as well, what has remained has been a certain nihilistic immanentism brimming with practical meaning. We live overturned in the present moment, which must be profited without having to ask ourselves disturbing and anguished questions. The motto of our time has been reduced to "live and let live." Such is the expression that we hear everywhere, with which we want to imply that we must leave philosophies and go keeping us as good as we can to achieve a satisfactory existence, convinced that in the end, no one will ask for accounts of how did you get it and that no one can "take away what has been danced."


It seems interesting to me to stop in the analysis of this brief sentence, full of pragmatism, which expresses the general feeling of the present man. In it, I see reflected the aspirations, both from doors to inside and from doors to outside, from men and women who have decided to live in full and all they aspire is to be happy here and now, as far as their possibilities allow them to. It also reveals the commitment or the lack of it, as you look, both with yourself and with others.

When we say that everyone has to live their life, what we are saying is that we have to know how to savor every moment of our existence without wasting any of them, aware that life is only lived once and that the passage of time is so fleeting that when you want to realize it your opportunity has passed. Imbued as we are of a pure and hard immanentism, we do not get tired of repeating "to live since there are only two days". What else can somebody who believes that everything ends with death do? What else could be expected of those who think that there is no past or future but we only have an ephemeral present?

Living life intensely now means something like exhausting all provisions and doing it without delay, because we do not know if tomorrow will come for us. Today it is not understood why we have to refuse to enjoy everything that life offers. We think it is meaningless to save for tomorrow what we can enjoy today, so no waiting for great occasions that may never arrive. The elegant costume hid in the bottom of the closet that we never wear, the expensive crockery placed between cotton that never we use, the exquisite perfume kept like gold in cloth as if it was a relic, the storage of provisions or the saving, they do not stop being seen like a madness by all those that faithful to the spirit of the time try to live to the day only with what they wear.

The incitement to live in haste and intensely has been the fruit of the experience of expiration of all that surrounds us. The events run so hastily that they have ended up putting us in an emergency. Trapped as we are in a changing and fleeting presentism we only have provisionality. If one day we would like to break its fence we would have to widen our field of vision and project our gaze on wider horizons, but this is complicated for those who have decided to live without responsibility with the past and without disturbing concerns for the future. It is clear that what counts today is a peaceful existence without great worries and let the days go by without any jumps, happy to say to life, I owe you nothing, you owe me nothing, and we are at peace. Certainly, such happiness can result in too much ravish and at ground level, devoid of any depth for having no guarantees of permanence; but this is what there is and modern man is satisfied with it, although we do not know if for a long time.

The yearning of the man of our time to live in full life is associated with the commitment to respect the lives of others. Doing so, I am also making myself safe from inappropriate interference by those I have by my side. It is an act of shared solidarity. For the others not to disturb me I have to start not bothering them. Let live is to apply the tolerance of every necessary point to be able to live in peace with others; but, it has to be clear which are the limits of a constructive tolerance. This "let live", understood as absolute omnipermissivess, for everyone to do what they want, responds to the spirit of the time in which we live and it is the logical and coherent consequence after having dynamited all ethical foundation. God is dead, as Sartre said, everything is allowed and the only thing that proceeds is to go to prohibit any prohibition, to stay in toxic libertarianism with freedom without restrictions, with a tolerance without limits.

Surely this is one of the problems of our time, but it would not be such if among the official guardians of morality there was not so much claudication. Today what is needed are courageous men, who forget the fears and complexes to speak clearly and say that a tolerance without limits is no tolerance, that an abuse of freedom ceases to be freedom to become a debauchery and all this for obvious reasons, because it is known that tolerance, as well as freedom, as moral virtues, must be adjusted to the faithful of the balance to stay in the right medium without excesses, neither on one side or the other. It is surprising how in the libertarian environment in which we move no one detects abuse of freedom, instead they report daily thousands of cases for lack of it, and how can this be? We have all become timers of the present situation and it may be that the real evil that afflicts us is our warmth. In any case, the phrases in question “live and let live" I would change it for this other "live and help to live"

We should understand that respect for the lives of others is compatible with the firmness of moral convictions. Having tolerance with others? Always, as long as this does not implies surrender. Let others live in the freedom of spirit? Always. To compromise with injustice, lies, dishonesty, perversion or immorality? Never. The respect for people is a fundamental demand, no doubt; but if by reason of the charge or any other circumstance I have to censure someone for something ignominious, not only can I but I have the duty to do it, yes, without hatreds or grudges, but with all the love of the world. I am not talking about imposing anything on anyone by hammering, or getting into the lives of others, but only defending our best heritage at a time when it is seriously threatened. The sacred duty of tolerance to others does not prevent me from saying that temporizing with the heartless, corrupt and criminal is an indecency. That to gild the pill to liars, tricksters and traitors are a scoundrel, that to agree always on everything and with all cannot be done without betraying yourself.

I have the impression that in our modern societies, men and women, parents and mothers overly tolerant are abundant, always condescending and accommodative willing to excuse what is not possible to apologize for even if they know, what happens is that it costs to go against the current and it's much easier to say yes always. They don't realize they're cheating themselves. An unlimited condescension leads me to think of folds and Phariseisms. A person abandoning their responsibilities has to do, I think, with the warmth or with the pusillanimity. Where have been those noble commitments to fight for Truth and Honesty with capital letters? At this crucial moment in history what is being needed are leaders who are, leaders passionate enough to defend the values that made us great¸ but unfortunately what abounds is the indolence, "the letting do."