Featured
articles
Are you homo or hetero?
We have gone from “we all have identical dignity” to “we are all normal”, which is certainly not the same.

We have gone from “we all have identical dignity” to “we are all normal”, which is certainly not the same. We do not need new terms to be an egalitarian society. 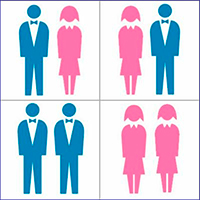 Are you homo or hetero?
We have gone from “we all have identical dignity” to “we are all normal”, which is certainly not the same.

A couple of months ago I wrote that it did not seem serious to call Christians "believers", because, deep down, we are far more unbelieving than atheists; believe ­we are in very few things, and we do not stand in the ranks of those who follow the countless dogmas of postmodernity. The fundamentalists of relativism, the idolaters of secularists fetishes, those who are believers.
I talked about this issue because one confides little of the words of fashion. As soon as one repeats too often and jumps on TV, I start to get it or laugh.
In that article, however, I did not quite explain why I have taken with the "believer" noun. The reason is that it is an invention of those who do not have faith, just as the word "payo" is a creation of the gypsies.
In Cervantes' time, say, there were no "believers." They were all saved two or three, and therefore it was not necessary to call them in any way. Normal doesn't need qualifiers. If the atheists needed it, that is, those who­of this general rule.
The problem arises when atheism and agnosticism become epidemics. The disbelievers come out of the closet, trust­ proudly their estrangement from God, and claim their status as "normal" trying to occupy the empty closet of those who believe in God. Then they close the door and hang a label: "The Believers."
Something similar is happening with another newborn word, which grows, proliferates and trivializes from time to this part. I am referring to the noun "heterosexual".
-Hey man, are you homo or hetero?
When I saw that a TV celebrity was talking in these terms to another celebrity, I said to myself: "boy, here is the theme". And is that until recently the so-called "hetero" simply did not exist. Being heterosexual was like being biped, that is to say "normal". On the other hand, it was a peacefully held truth that the attraction of the sexes had a lot to do with reproduction. Hence, if someone was attracted to people of the same gender or by other types of entities not suitable for fertilization, it was considered to all effects that suffered an anomaly. And anomalies -even if they do not affect personal dignity- do need a word in the dictionary to distinguish them from normal situations.
The dictionary did not conform to a word; it collects dozens, almost all derogatory, to identify homosexuality and homosexuals. I hope -I say it with all my heart- those words go very soon to the morgue.
Now we're on the opposite pole. It was necessary to fight to be recognized Those people their rights. And that's where we are. But we have gone from "we all have identical dignity" to "We are all normal", which is certainly not the same.
There are no more blind people, they are sighted. And as the blind are "normal" will have to find a word for "the others" which are also standard­them This is the only way to restore equality. Hence, the "non-blind" call us "seers", as a Rappel.
Another example, this summer I was dispossessed of my gallbladder in an operating room. I assure you that I do not regret the loss, on the contrary. However, since then I am aware that I am missing something: something not too serious, of course, but I would not dare to say that it is "normal" not to have a vesicle, nor that I should feel the pride of not having such a curious gland. If I thought about it, we would have to create at least two new terms to consider myself in a situation of equality with those who have not undergone a laparoscopy.
Hey, man, are you vesiculated or “Avesiculado”?
Then we invent the "Avesicular Pride Day". And let no one dare meddle with us, for we would call it “Avesiculófobo”, which is the sea of apparent.
-But then, are you homo or hetero?
-Me? Payo, seer, hetero and “Avesiculado”.
-WOW…