Featured
articles
Are we too many or missing a lot?
The alarm that we are too many is very old but often hides a big lie.

Various ideological thinkers and groups have launched the alarm against the "excess" of population on the planet, and proposed concrete actions, including international conferences, to confront the issue of "demographic explosion". The alarm that we are too many is very old but often hides a big lie. 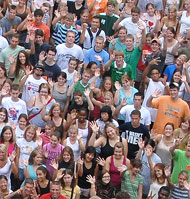 Are we too many or missing a lot?
The alarm that we are too many is very old but often hides a big lie.

The alarm that "we are too many" is very old. Already in the ancient Greek world, there were complicated plans to prevent cities from having an "excessive" population.
The modern world found in Thomas Malthus (1766-1834) a voice of alarm at the "danger" of overpopulation, and proposed concrete ideas to limit births among the poor.
Charles Darwin endorsed some Malthusianas ideas and thought of the need to avoid, with the help of science, the birth of defective human beings.
In the XX century, various ideological thinkers and groups launched the alarm against the "excess" of population on the planet, and proposed concrete actions, including international conferences, to confront the issue of "demographic explosion".
In the wake of the alarm created, many times with unsubstantiated theories, others with a very well organized propaganda, it was easy to promote campaigns aimed at addressing the danger of the demographic explosion. A scientist from the United States, Van Rensselaer Potter (1911-2001), considered that the situation was so urgent that radical measures needed to be taken. It was not enough to disseminate contraceptive use but to liberalize abortion to ensure effective control of the human population.
In democratic countries, the demographic control was carried out, generally, of free mode. Marriages and non-married couples used contraceptives with "normality". Others opted for the safest method, sterilization. If the method used was not effective and an unwanted child appeared, many resorted to abortion.
In other countries dominated by dictators of the left or despotic rulers, policies were applied in favor of abortion and sterilization, even forced. There was no shortage of places where doctors cheated on women and sterilized them. Other times they promised financial aid to those who were sterilized; there were cases in which pressures and threats were used that would be unthinkable in the free world.
To this is added the high number of abortions each year: we talk about a figure between 30 and 50 million worldwide.
The results are before our eyes: global birth has fallen widely. In some countries with more speed than in others, but the phenomenon is evident. Worldwide, according to statistics offered by the UN, it has gone from a birth rate equivalent to 37.4 births per 1000 inhabitants in the years 1950-1955, to 20.3 births by 1000 inhabitants for the years 2005-2010. Some countries have entered a new demographic phase, with more deaths than births.
In this situation, we can ask ourselves:
Are we too many or missing a lot?
To say that we are too many implies saying that some "leftovers". To say that some "surplus" is an enormous injustice and a great discrimination because it means that some (those that do not have enough) are more important than others (those that do have a surplus).

Given this discriminatory mentality, we have to say that no one is left over, because every human being is worth by itself, whatever the situation in which he begins to live.
If one is conceived in a poor family, or with sick parents, or in a context of war, or in a situation of famine, it does not stop being a human being worthy of respect. It is worth less than who is born in a wealthy family, in an environment of peace, full of health and with a good life expectancy before their eyes.
None of the billions of human beings are spared, because each of them is worth infinitely as a man, as a woman, when dignified in their earthly existence and in their orientation towards eternal life.
Rather, we would have to recognize that the selfishness of the powerful has led to the lack of millions and millions of companions on the way. Because they were aborted, because they were killed, because they were born in an environment of misery that led them to premature death.
Maybe, some say, if those millions of absentees were alive, governments would have been forced to build more hospitals, to put more urban buses in the cities, to invest in the countryside to increase production, to promote employment for the new generations, to favor the construction of buildings. But that is not the task of each town? Are we not called to help those who arrive, instead of proposing systems in which those who are declared "surplus" will not be born or will be aborted?
It is a huge job that needs to be done to accommodate millions of children who grow up every day and prepare themselves for adulthood. But it is the work and mission that adults have in front of each new human generation, in which no one is left over and in which each one has immense value.
Many are missing at the banquet of human life. Believers know that children eliminated before birth are already with God. But his violent death tells us that we have much to change in this world of injustices that despised them because some said "leftovers."
No one left in this world. We all need everyone, and we can all learn or teach everyone. Life is beautiful only if we open to the different, the small, the poor, the needy, if we discover that treasure of the immortal soul that is in each new son, if the family becomes a commitment of love open to life.
Millions of friends and fellow travelers are missing in the world. We can honor their memory and mourn their absence if we undertake, seriously, to overcome that culture of death that has dominated for years in many cultural environments, if we build societies and nations capable of hosting, with hope and justice, without discriminations, to each son who begins the journey of his human adventure.