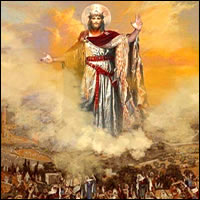 Me, king? But how? If I’m a layman, I cannot be a king... Well, let me remind you that you're not only King, but you are also a priest and a prophet!

In previous articles we’ve already discussed the triple function of priests, prophetic and royal that we acquired in the baptism. We’ve focused on the priestly and prophetic elements so now we’ll analyze what entails in our daily life being also kings.When we think of a king, it’s most likely that images of wealth, palaces and jewels come to our minds. These are not exactly the characteristics that we as Catholics have from Kings, but there is one thing that does come to our minds: Freedom.

When we refer to a king, he is usually also called a sovereign and that is because he has sovereignty or freedom. He is the one who has the power over the reign and can make his own decisions. We know that Christ is king, and He wants us to share his sovereignty. But what do we have this sovereign freedom for? Above the Kingdom of sin.

When Jesus died on the cross for us, he did it to free us from sin, hence we can now say that this king role implies that we’re no longer slaves of the sin.And in particularly, this means that there is no temptation that we can’t overcome.

As Saint Paul tells us we have "the freedom of the Children of God" (cf. Rom 8, 21), so no matter what the situation is, we’ll always be able to decide to avoid temptation. Sometimes it may seem that we have no choice but to fall into sin, but when this happens do not forget that you are king and that your reign makes you stronger than any temptation.

Service. The other side of our role as kings must be to imitate the reign of Christ. As we know, He, who is king, didn’t come to be served but to serve. If when James and John approached Him and asked Him to give them an important place to his right and to his left, the answer they obtained was: "Whoever wants to be the first, must become a servant for all" (Mc. 10, 43), with how much more reason , we who are kings must be in the service of others.

And this is something that we can put into practice very easily, because it doesn’t imply great efforts but small everyday actions, but, above all, a change of internal attitude. It means that we are attentive to the needs of others, especially those closest to us and that we’re willing to help, even without being asked.

So, I assure you, if you become a King, with the power to overcome sin, but also to be putted at the service of others, you will be able to better fulfill this call to establish the Kingdom of God in the world.