Applause that are convictions
Good thing that, above human machinations, God´s judgment puts things in place.

The Exaltation or the rehabilitation of characters who have been responsible for serious crimes and condemned in the past. 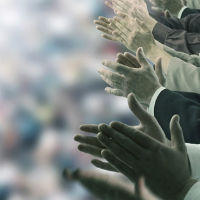 Applause that are convictions.
Good thing that, above human machinations, God´s judgment puts things in place.

Among the phenomena that occur in the complex modern world there is one that causes special debates: The Exaltation or the rehabilitation of characters who have been responsible for serious crimes and condemned in the past.

This is usually the case for ideological reasons. If those who have relevance in the cultural, political, informative world, share ideas with the character who acted unfairly in the past, it is natural that they want to defend it and even unsalable it.

Applause and recognition to those who have blood-stained hands or serious responsibilities in the damage of hundreds of innocents cause anger in the victims and their descendants, as well as in those who defend justice from the truth.

But in a sense the "rehabilitating" applause is a further condemnation of those characters from the past. Why? Because The applause of the one who holds an ideology unjust and alien to the truth not only does not rehabilitate, but increases notably the signs of evil of the character Exalted.

Despite the effort of those who want to rewrite history to exalt their leaders and to denigrate their adversaries, the truth can never be killed, nor the applause that comes from dishonest hands erase the crimes committed by others in the past.

Those who applaud the criminals of the past or the present, therefore, not only make more evident the damage committed by certain characters, but they manifest their own way of thinking unfair, fallacious, and often filled with a revanchism that will never deserve to be Accepted.

Meanwhile, innocent victims are silent, wrapped in mass graves, people-forsaken graves, and books rewritten in a deceitful way to deny them recognition that they would deserve in a world far from being authentically righteous.

Good thing that, above human machinations, the judgment of God puts things in his place, punishes those faults of those who do not repented, and exalts those who suffered in silence and with dignity persecutions and murders.

These victims may be forgotten by some historians and by ideologues of the modern world, but they will always be alive in the heart of God and so many good people, lovers of truth and justice.