Vatican
News
Pope urges Telepace TV to be voice of voiceless, peace builders
Voice of those who have no voice. 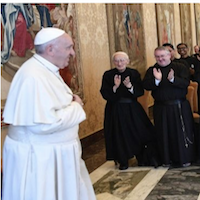