Vatican
News
Let us allow ourselves to be consoled by God
Pope Francis speaks about consolation, which he says should be the normal state for Christians. 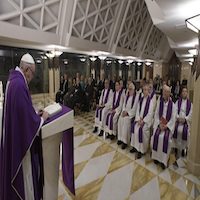 Let us allow ourselves to be consoled by God

At the Mass at Casa Santa Marta, Pope Francis speaks about consolation, which he says should be the normal state for Christians. But in today’s world, he says, the word “tenderness” has effectively been removed from the dictionary.

The Lord comforts us with tenderness, like mothers who caress their children when they cry. In his homily at the daily Mass, Pope Francis encouraged us to allow ourselves to be comforted by God, and not to put up resistance.

The first reading, taken from the Book of the Prophet Isaiah (40,1-11), is an invitation to consolation: “Comfort, comfort my people, says your God,” because “her guilt is expiated.” This, the Pope explained, refers to the “consolation of salvation,” to the good news that “we are saved.” The Risen Christ, in those forty days after His Resurrection, did just that with His disciples: He consoled them. But, Pope Francis continued, we tend to resist consolation, as if “we were safer in the turbulent waters of our problems.” “We bet on desolation, on problems, on defeat;” the Lord works very hard to console us, but encounters resistance. This can be seen even with the disciples on the morning of Easter, who needed to be reassured, because they were afraid of another defeat.

Tenderness: a word that has been struck from the dictionary

“We are attached to this spiritual pessimism,” Pope Francis said. He described how children who approach him during his public audiences sometimes “see me and scream, they begin to cry, because seeing someone in white, they think of the doctor and the nurse, who give them a shot for their vaccines; and [the children] think, ‘No, no, not another one!’” “And we are a little like that,” the Pope continued, but the Lord says, “Comfort, comfort my people.”

And how does the Lord give comfort? With tenderness. It is a language that the prophets of doom do not recognise: tenderness. It is a word that is cancelled by all the vices that drive us away from the Lord: clerical vices, the vices of some Christians who don’t want to move, of the lukewarm… Tenderness scares them. “See, the Lord has His reward with Him, His recompense goes before Him” – this is how the passage from Isaiah concludes. “Like a shepherd He feeds His flock; in His arms He gathers the lambs, carrying them in His bosom, and leading the ewes with care.” This is the way the Lord comforts: with tenderness. Tenderness consoles. When a child cries, a mom will caress them and calm them with tenderness: a word that the world today has practically removed from the dictionary.”

Consolation in times of martyrdom

The Lord invites us to allow ourselves to be consoled by Him; and this is also helpful in our preparation for Christmas. And today, the Pope said, in the opening prayer from the Mass, we asked for the grace of a sincere joyfulness, of this simple but sincere joy:

The Lord knocks at the door with caresses

When we suffer, we might not feel that consolation; but a Christian will not lose interior peace “because it is a gift from the Lord,” who offers it to all, even in the darkest moments. And so, Pope Francis said, in these weeks leading up to Christmas, we should ask the Lord for the grace to not be afraid to allow ourselves to be consoled by Him. Referring back to the Gospel of the day (Mt 18,12-14), he said we should pray:

“That I too might prepare myself for Christmas at least with peace: peace of heart, the peace of Your presence, the peace given by Your caresses.” But [you might say] “I am a great sinner.” – Ok, but what does today’s Gospel tell us? That the Lord consoles like the shepherd who, if he loses one of his sheep, goes in search of it; like that man who has a hundred sheep, and one of them is lost: he goes in search of it. The Lord does just that with each one of us. [But] I don’t want peace, I resist peace, I resist consolation… But He is at the door. He knocks so that we might open our heart in order to allow ourselves to be consoled, and to allow ourselves to be set at peace. And He does it with gentleness. He knocks with caresses.