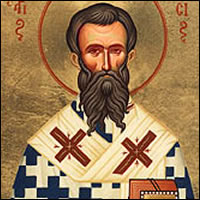 7 December (anniversary of his ordination)

4 April (Old Catholics; Lutherans; Milan, Italy for the memorial of his death)

Born to the Roman nobility. Brother of Saint Marcellina and Saint Satyrus. Educated in the classics, Greek, and philosophy at Rome, Italy. Poet and noted orator. Convert to Christianity. Governor of Milan, Italy.

When the bishop of Milan died, a dispute over his replacement led to violence. Ambrose intervened to calm both sides; he impressed everyone involved so much that though he was still an unbaptized catechumen, he was chosen as the new bishop. He resisted, claiming that he was not worthy, but to prevent further violence, he assented, and on 7 December 374 he was baptized, ordained as a priest, and consecrated as bishop. He immediately gave away his wealth to the Church and the poor, both for the good it did, and as an example to his flock.

Noted preacher and teacher, a Bible student of renown, and writer of liturgical hymns. He stood firm against paganism and Arians. His preaching helped convert Saint Augustine of Hippo, whom Ambrose baptized and brought into the Church. Ambrose’s preaching brought Emperor Theodosius to do public penance for his sins. He called and chaired several theological councils during his time as bishop, many devoted to fighting heresy. Welcomed Saint Ursus and Saint Alban of Mainz when they fled Naxos to escape Arian persecution, and then sent them on to evangelize in Gaul and Germany. Proclaimed a great Doctor of the Latin Church by Pope Boniface VIII in 1298.

The title Honey Tongued Doctor was initially bestowed on Ambrose because of his speaking and preaching ability; this led to the use of a beehive and bees in his iconography, symbols which also indicate wisdom. This led to his association with bees, beekeepers, chandlers, wax refiners, etc.

relics at basilica of Milan