Vatican
News
Christians must provide credible witness with their lives
Testimony means “putting one’s life on the line” and “doing what I say I do”. 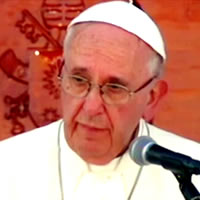 On the Feast of St Andrew Pope Francis addressed believers at Mass in the Casa Santa Marta urging them to be close to the Church of Constantinople, of which Saint Andrew the Apostle is the patron.

Pope Francis has invited the faithful to “leave everything in order to go forward in proclamation and witness, just as Peter and Andrew did”.

Speaking during the homily at morning Mass on the Feast of St Andrew the Apostle, the Pope also invited Christians to be close to the Church of Constantinople and he prayed for unity between the Churches.

Be coherent in proclaiming Christ

The Pope focused his reflection on announcing the Gospel urging believers to put aside “that attitude, that sin, that vice” that each of us has “within” in order to be “more coherent” and to be able to be credible in proclaiming Jesus with our own witness.

Taking his cue from the First Reading in which Saint Paul explains how faith comes from what is heard, and what is heard comes through the word of Christ, the Pope highlighted the importance of the proclamation of the Gospel,” the proclamation that Christ died and was resurrected to save us.

To proclaim Jesus Christ, he said, is not just bringing “simple news” but “the only great Good News” he said.

He underscored the fact that it has nothing to do with advertising a good person who has done good, has healed many people and taught us beautiful things: “No, it's not advertising. It's not proselytizing (…) it is not what a preacher does according to the logic of marketing.”

Announcing Christ, the Pope continued, is neither proselytism nor advertising nor marketing: it goes well beyond.

Thus, he reflected on the mission of the apostle who puts his own life on the line and he recalled an Argentinean saying that uses the image of “putting one’s own flesh on the grill:” that is, really putting oneself at stake.

He specified that “this journey to announce the Gospel by putting my life on the line” is a one-way journey: “There is no return ticket” the Pope said, “turning back would be apostasy” while testimony means “putting one’s life on the line” and “doing what I say I do”.

To be able to proclaim the Word we must be witness, the Pope reiterated and he lamented the “scandal” brought about by those who proclaim to be Christians and then live “as pagans, as non-believers”, as if they did not have “faith”.

He called for coherence in life which is what gives credibility to witness and described those who “put their lives on the line to the end” as martyrs.

He recalled how God the Father "to make himself known" sent "his Son in the flesh who gave his own life” and said this is fact that “continues to scandalize” because God became “one of us on a one-way journey”.

He pointed out that the devil tried to convince Jesus to take another path, but He lived in accordance with the will of the Father until the end.

The proclamation of Jesus, the Pope said, must follow the same path: the path of testimony, because He was the witness of the Father made flesh.

The Pope upheld the witness of martyrs whom, he said, are those who show the proclamation is true.

He spoke of men and women who have given their lives - the apostles gave their lives – but also of the many unseen men and women in our society and in our families, who bear witness every day, in silence, with their lives and their coherence to Jesus Christ.

All of us, the Pope concluded, take on “the mission of proclaiming Christ” and of living as Jesus “taught us to live (…) in harmony with what we preach” when we are baptized, otherwise the result is scandal and that does “so much harm to the people of God”.