Daily Gospel
Liturgical Cycle B
The Paralytic Versus the Pharisees
Luke 5: 17-26 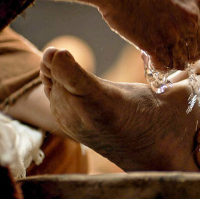 Monday of the Second Week of Advent

1. The Pharisees’ Faith: The Pharisees sat in front of Christ watching him cure the sick. Earlier they had seen many other miracles, but despite what they saw they could not bring themselves to believe in Christ. Miracle after miracle couldn’t change their mind. Jesus decides to give them a decisive miracle so that they will believe. He decides to cure the paralytic to show his power to forgive sins. Since disease for the Pharisees was a sign of sin, they should have been ready to accept Jesus’ message of healing and forgiveness. But they were too wrapped up in seeking their own plans and protecting their own honor to discern God’s loving mercy behind what they witnessed. How often do we want God to give us a sign, so we can follow his plan? And how often are we not open to what he tells us, simply and directly because we’re too focused on achieving our own plans?