Vatican
News
All love is meant to be faithful, generous and fruitful.
The husband must love his wife as Christ loves the Church. 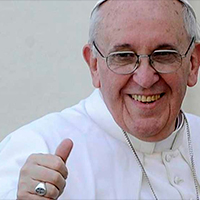 Pope Francis says every Christian vocation, including the priesthood and consecrated virginity, are deeply spousal, life-giving and self-sacrificing. He was speaking at the General Audience during which he reflected on the 6th Commandment.

Speaking to the pilgrims gathered in St. Peter’s Square for the Wednesday General Audience, Pope Francis reflected on the 6th Commandment, “You shall not commit adultery”, and said that as Christians, our “original call” is "to full and faithful spousal love", which Jesus Christ revealed and gave to us.

Commenting on the Letter of St. Paul to the Ephesians, he described the concept as “revolutionary” saying that notwithstanding the “anthropology of the time” it affirms that “the husband must love his wife as Christ loves the Church”.

And elaborating on this, the Pope explained that although the Commandment refers “explicitly to matrimonial fidelity”, it also speaks to every human relationship and vocation.

Marriage is a beautiful journey

He said that when we become adults we are called to live a spousal and parental attitude, which is manifested in various situations of life, and explained that a person who is “adulterous, luxurious, unfaithful” is really an immature person who “keeps his life for himself” and interprets situations “on the basis of his own well-being and self-satisfaction”.

“To really get married”, he said, “it is not enough to celebrate marriage! We need to make a journey from the ‘I’ to the ‘We’ and think and live for each other”.

Marriage, the Pope said, is a beautiful journey, and true love enables us to find ourselves and give ourselves away.

Pope Francis then went on to say that the undying love of Christ, that is the basis of marital fidelity, is also reflected in the spousal love and spiritual parenthood that mark the vocations to priestly ministry and consecrated virginity.

In this sense, he said, every Christian vocation is spousal.

He said the priesthood is such because it is the call, in Christ and in the Church, to serve the community with all the love, care and wisdom that the Lord gives.

“In the priesthood we love the people of God with all the paternity, tenderness and strength of a spouse and a father” he said.

In the same way, he continued, consecrated virginity in Christ must be lived faithfully and joyfully as a spousal relationship of fruitful motherhood and fatherhood.

The full meaning of sexuality

And referring to the very words of the 6th Commandment, Pope Francis said that as men and women, body and spirit, we are called to love in ways that leave no room for lust or promiscuity.

The command – “You shall not commit adultery” – he said, is an invitation to live fully our original calling to that pure and faithful spousal love that is revealed in Jesus Christ.

In His mystery, he continued, and in his love we come to understand the full meaning of the gift of our human sexuality and the fidelity demanded by the marriage covenant.

“The human creature, in its inseparable unity of spirit and body, and in its masculine and feminine polarity, is a very good reality, destined to love and be loved. The human body is not an instrument of pleasure, but the place of our call to love, and in authentic love there is no room for lust and its superficiality. Men and women deserve more than this!” he said

In his final greetings Pope Francis recalled that tomorrow we celebrate the Solemnity of All Saints and, on November 2, we commemorate all those who have departed.

“The witness of faith of those who have gone before us, should strengthen in us the certainty that God accompanies us on the path of life, never abandoning anyone to himself, and wants all of us to be holy, as he is holy” he said.