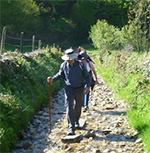 Life is a journey. So since the synod journey is almost over, the most symbolic way to end the journey is with a pilgrimage.

“We are from a Catholic university and we are making this pilgrimage together with all the bishops.”

“It's beautiful to renew our faith and revitalize it near the tomb of St. Peter. This, in some way, is the gift of faith, of Jesus Christ. This gift is brought to us by Rome and by Europe.”

Some synod participants surrounded themselves with young people from universities and colleges on this 5-kilometer pilgrimage. They walked the last stretch of Via Francigena to then enter St. Peter's Basilica to participate in a Mass with the pope.

The goal was to pray together before the conclusion of the synod.

Already inside the basilica, Pope Francis finished the last part of the pilgrimage with them before beginning the Mass. It was celebrated by Cardinal Lorenzo Baldisseri, general secretary of the synod. The homily, on the other hand, was given by Msgr. Rino Fisichella.

He compared the synod to the relationship between apostles John, who was the youngest, and St. Peter, one of the oldest. John arrived first at Jesus' tomb, but he waited for Peter to arrive. Jesus also had patience with Peter. Msgr. Fisichella explained how the first pope changes little-by-little. He says the apostle received a second call when Jesus entrusts him to take care of the Church.

“This second call is the call to love, to give everything, everything. It's not only to 'leave,' but to 'give up everything.' Peter is not yet capable. My brothers: 30 years will pass, as the inscription says under the statue of Peter. After 30 years, Peter, at that moment will kneel before God. Peter is now available and is able to give himself completely. This is the gift of martyrdom.”

This was the ultimate grand act of the synod before the conclusions are made public. The pope will celebrate a closing Mass on Sunday. It will end a long period of reflection within the Catholic Church