Youth
Virtues
Becoming digital missionaries
The Church, he said, wants to dwell in the digital world in an official and serious way. 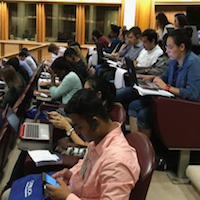 Today at the Synod briefing the press were told that a repeated theme in conversation in the Synod assembly was how the Church can be part of the digital world. For this, the Church needs “digital missionaries”.

Dr Paolo Ruffini, Prefect of the Vatican Dicastery for Communications, started the briefing by listing a number of issues that had been spoken about in the general congregation of the Synod. He said that migration, both internally and externally in countries, was a hotly debated issue. Young people are, he said, concerned about the stewardship of creation. He said that the assembly heard that young people react negatively to corruption in politics. He also noted that it was said that young people want the Church to be a place of excellence. Other issues that arose included conscience, truth and mercy, teaching in catholic schools and universities and how drug use and alcoholism often led young people to crime.

The Church actually has a very positive attitude, towards the digital world, Bishop Tencer said. It has been repeated many times that a computer or phone is not good or bad, it is neutral. He said that in Iceland they would be lost without the digital world. The Bishop explained how they organised catechism through skype. He says that he sat in front of a computer and was in contact with young people talking to them in a very real way. He encouraged them to download the Bible onto their phones, they are able to find things quickly. He said that this was not decay but a positive development. The digital world is moving the Church forward and this is good.

Br Alois said conversion was mentioned often. He said that he feels the conversion of mindsets is taking place. Many Synod Fathers, he feels, all want to be closer to young people. He believes that this is leading to a conversion of the Church’s structures.

He said that friendship is a recurring word. He would like to dig more deeply into the theological meaning of this word, look more deeply at Jesus as a friend. He said that young people want to be listened too but, at times, cannot find the door into the Church to be heard. He says that friendship as unity and solidarity should be explored. Br Alois shared that at Taize listening is fundamental, the whole Church needs to find a way of expressing openness and showing it, he added.

The Synod is a construction site

The Synod, Fr Lepori says, is like a construction site. You will never find an ideal method, as with anything in life, but you have to start from the ground and build a whole new building.

Bishop Tencer said that one thing that struck him was that this Synod has been a great success because it was well prepared. Information has come from the whole world. he felt that the conversation has been very positive and that this Synod would certainly help the Church move forward.