Vatican
News
Synod is a time for sharing
Pope Francis said: the Synod, must be an exercise in dialogue. 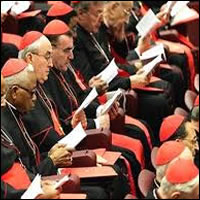 Pope Francis leads the assembled gathering in the Liturgy of the Hours, and gives the opening address at the XV Ordinary General Assembly of the Synod of Bishops.

In his Opening Speech for the Fifteenth General Assembly of the Synod of Bishops, Pope Francis said “the Synod we are living is a time for sharing” – sharing that must involve both speaking with courage and frankness, and listening with humility. The Synod, he said, “must be an exercise in dialogue,” especially for those directly participating in the event.

Pope Francis emphasized that the Synod “is an ecclesial exercise in discernment,” an “interior attitude rooted in an act of faith.” One of the innovations in this General Assembly will be moments of silence after every five speeches, precisely in order for participants to discern what they have heard.

The importance of listening was in important motif in the Pope’s speech. In order to be a Church that “listens and journeys,” Pope Francis said we must “leave behind” our “prejudice and stereotypes.” In particular, he warned against both the “scourge of clericalism” and the “virus of self-sufficiency.”

Despite the troubles the Church faces today, Pope Francis reminded us that “our faith tells us that it is also the Kairos,” God’s time, “in which the Lord comes to meet us in order to love us and call us to the fullness of life.”

“May the Synod awaken our hearts!” he proclaimed, expressing the hope that “the meeting between generations” might “be extremely fruitful for giving rise to hope.”

During the Synod, Pope Francis said, “let us ‘spend time with the future,’” in order “to take from this Synod not merely a document – that generally is only read by a few and criticized by many – but above all concrete pastoral proposals capable of fulfilling the Synod’s purpose.”