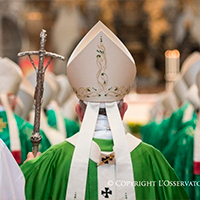 In the wake of recent developments regarding clerical sexual abuse and cover-ups in the Catholic Church, the Council of Cardinals (C9) has expressed it solidarity with Pope Francis. The Holy See is preparing to make “eventual and necessary clarifications” on the issue.

The Holy See’s Press Office released a statement on Monday saying that the Council of Cardinals, currently in session from Monday through Wednesday, has “expressed its full solidarity with Pope Francis with regard to the events of recent weeks, aware that in the current debate the Holy See is about to make the eventual and necessary clarifications.”

Also called the C9, the Council of Cardinals consists of 9 members appointed by the Pope to serve as his advisors in Church governance and in elaborating the reform of the Roman Curia and of the Apostolic Constitution.

The statement said, “The Council of Cardinals, in the first meeting of its twenty-sixth session, in which it prepares to submit to the Holy Father its proposal on the reform of the Roman Curia drawn up in its first five years of activity, and in view of its continuation, has decided to ask the Pope to reflect on the work, structure and composition of the Council itself, also taking into account the advanced age of some of the members.”

The C9 also "expressed its satisfaction for the good outcome of the Ninth World Meeting of Families in Dublin, congratulating Cardinal Kevin J. Farrell and the Dicastery for the Laity, Family and Life, which along with Archbishop Diarmuid Martin, organized the event.”