Vatican
News
Pope to Parents: Work together with schools
Pope Francis noted the alliance between families and the school system 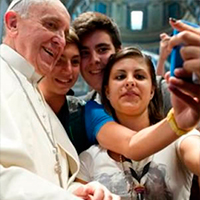