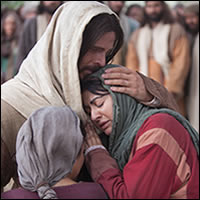 A Pharisee invited him to dine with him, and he entered the Pharisee's house and reclined at table. Now there was a sinful woman in the city who learned that he was at table in the house of the Pharisee. Bringing an alabaster flask of ointment, she stood behind him at his feet weeping and began to bathe his feet with her tears. Then she wiped them with her hair, kissed them, and anointed them with the ointment. When the Pharisee who had invited him saw this, he said to himself, "If this man were a prophet, he would know who and what sort of woman this is who is touching him, that she is a sinner." Jesus said to him in reply, "Simon, I have something to say to you." "Tell me, teacher," he said. "Two people were in debt to a certain creditor; one owed five hundred days' wages and the other owed fifty. Since they were unable to repay the debt, he forgave it for both. Which of them will love him more?" Simon said in reply, "The one, I suppose, whose larger debt was forgiven." He said to him, "You have judged rightly." Then he turned to the woman and said to Simon, "Do you see this woman? When I entered your house, you did not give me water for my feet, but she has bathed them with her tears and wiped them with her hair. You did not give me a kiss, but she has not ceased kissing my feet since the time I entered. You did not anoint my head with oil, but she anointed my feet with ointment. So I tell you, her many sins have been forgiven; hence, she has shown great love. But the one to whom little is forgiven, loves little." He said to her, "Your sins are forgiven." The others at table said to themselves, "Who is this who even forgives sins?" But he said to the woman, "Your faith has saved you; go in peace."

Introductory Prayer: Holy Trinity, I cannot see you, but you are with me. I cannot touch you, but I am in your hands. I cannot fully comprehend you, but I love you with all my heart.

Petition: Lord Jesus, help me to be humble and open to interior growth.

1. Ostensible Openness and Spiritual Pride: Simon the Pharisee has an apparent openness to the Lord. He invites him to dine. He observes him. And he engages him in cordial dialogue. Nonetheless, we see that Simon interiorly judges the Lord, dismisses him as a farce, and ultimately rejects him. The Pharisaical attitude consists essentially in trying to force God into our own preconceived notions of how he should operate. The Pharisees had the correct view of moral precepts (both Simon and Jesus agree that this woman is a sinner). But they fail in recognizing their own sins, which are rooted in pride. This pride manifested itself in that unspoken attitude that God must adjust himself to our way of being and acting.

2. Redemption: The Pharisee thinks he is sinless and does not admit that he needs a savior. His prideful attitude of “assessing” the Lord proceeds from a deeper pride that blinds him to who he really is before God: a simple creature in need of divine help and grace. Simon wants God to conform to his preconceptions, and winds up rejecting Christ. This is the paradigm of pride. It distorts reality and forges its own self-centered world that Christ cannot penetrate. The woman knows she is a sinner and recognizes the path to her salvation in the words and example of Jesus. She painfully realizes who she is and keenly longs for salvation. The words and example of mercy of Christ resonate deeply in her heart and invite her to repentance. This is the paradigm of humility. Its strength lies in a knowledge and serene acceptance of the truth and makes redemption possible.

3. Christ’s Goodness: Our Lord’s loving treatment of both the woman and Simon displays a remarkable balance of kindness. He carefully avoids the opposite extremes of condemnation and indifference to others’ sins. The reason Our Lord is able to offer hope and consolation to the repentant sinner as well as to invite the proud with a gentle call to repentance is that Christ will die for both. In this we see Christ’s goodness. He comes to save us all, but we must choose to accept his goodness.

Conversation with Christ: Jesus, help me to realize who I am and who you are. Teach me gratitude for your goodness and hope in your mercy. Help me to recognize my pride and strive to overcome it so that you can fill my life with your goodness.

Resolution: I will avoid judging others today.