Daily Gospel
Liturgical Cycle B
Who Am I That My Lord Should Come to Me?
Matthew 1:1-16, 18-23, Feast of the Nativity of the Blessed Virgin Mary 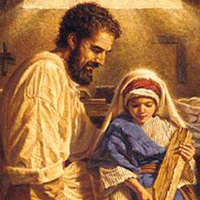 Introductory Prayer: Lord I thank you for the gift of faith. I believe only because so many others believed before me – and often at what great price! As I begin this prayer I review my genealogy of faith remembering all those who have passed on the faith to me. I strive to be a link in the faith chain for many other souls.

Petition: Dear Jesus, help me to be humble like the Blessed Virgin Mary.

1. God Is With Us: Today’s Gospel narrates for us the great mystery of the Incarnation. Why would God choose to become one of us? In his lineage appear the good and the bad, the faithful and the weak, the useful and useless. Why does God choose to take what is faulty, inferior, and make it his own? Why does he purify, restore, elevate, and cure what we are and what we offer him? Why? Why does he take upon himself my lineage, my personal history –– both the good and the bad –– and shape it into salvation history, for myself and for others? Why does he continue to do this? When will it be enough? God has said and will always be able to say, “What more could I have done for my people?”

2. Blessed Are You and Blessed Is the Fruit of Your Womb: Joachim and Anna, the parents of Mary, were in a marriage apparently “going nowhere”: It was sterile. Tradition has it that Joachim was scorned by a bystander when presenting his offerings, because God had left him without offspring. Feeling deeply offended and downhearted, he followed his flocks of sheep into the wilderness and didn’t return to his wife for a long time. In the desert, he supposedly was informed by a supernatural appearance that a child would be born to him. When Joachim returned to his wife in Bethesda, inspired with new hope, she became pregnant and gave birth to Mary, who was born without sin. God takes what is useless and creates his masterpiece, the Immaculate Conception. Indeed, he raises up the lowly. What plans does he have for my life? Where do I fit into salvation history?

3. Let It Be Done According to Your Word: Having been told by her parents of the special circumstances of her birth, Mary grew of age “treasuring these things in her heart” (Cf. Luke 2:51). It is understandable that the pious girl Mary wanted to devote herself entirely to God, and perhaps, in her early years, took a vow of continence. Her simple and total dedication to God indeed made her his “highly favored daughter.” But God had other plans for her: He would ask her to bear his Son. Once again, God takes what is freely offered him and molds it into what he desires. He takes what is good and beautiful and makes it exceedingly so for the salvation of many. God humbly inserts himself into my boring and defective human lineage.

Conversation with Christ: Lord, help me to remember today all the good things you have given me and my family. Let me see your work and your providence. I know that you come to my aid in hundreds of different ways. Help me to become more like Mary, and to ponder over all these things in my heart.

Resolution: I will look at my vocation with faith and new hope, confident that God is comfortable in inserting himself in the most common of circumstances. I will try to see his hand in at least one event of my day today.