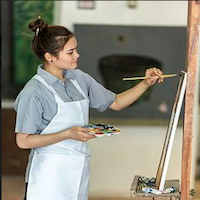 Introductory Prayer: Lord, I come to you again in prayer. Even though I cannot see you, I know through faith that you are present in my life. I hope in your promise to be with me. I love you, and I know you love me. Accept this prayer as a token of my love.

Petition: Teach me, Lord, to take all that you have given me and make it produce fruit for your kingdom.

1. God’s Gifts: The Gospel tells us clearly that God distributes his gifts among us as he wills, and he entrusts each one of us with a mission. He gives us what we need to produce fruits for his kingdom, and he expects us to use those gifts responsibly and diligently. No two people are exactly alike, and God treats each one individually as a unique person made in his image. We need to live before God and respond to him sincerely by using to the maximum the talents he has given us. Are we making the best use of all that God has given us, or have we neglected some things and taken others for granted? Might we be committing a sin of omission with regards to some of our talents?

2. Life as a Mission: The servants who invest the talents and make a return on them have understood the purpose of their lives and the time they have at their disposal. These servants were generous with everything their master had given them, making it bear fruit, and they received from him the reward of greater intimacy and more responsibility. Each of us is also given a limited amount of time in life to use our various gifts to give glory to God and help save other souls. We too should work every day to hear those words: “Well done, good and faithful servant.”

3. The Useless Servant: How often we are paralyzed by fear or false prudence into doing nothing, into trying just to preserve ourselves! Sometimes we don’t take God’s gifts seriously or think we have been given very little, and we use that as a rationalization for making no effort or for producing little for God. We blame circumstances or others; but the fact is we are neglecting to produce the fruits God wants. The master didn’t expect a return of five talents from the servant to whom he gave only one. He would have been happy with a return of one more, but the lazy servant closed in on his egoism, self-love and laziness. We must resolve to use our God-given talents wisely to net him a big return.

Conversation with Christ: Lord, give me the grace and love to work for your kingdom with all the talents that you have given me. Let me return them all to you with real fruits for your kingdom.

Resolution: I will make a plan for evangelizing other souls and look for fruits of holiness in others.