Vatican
News
The Nunzio Sulprizio will be Canonized in October 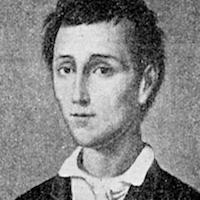 Pope Francis announces that he will canonize Nunzio Sulprizio in October

Pope Francis announces on Thursday during an Ordinary Public Consistory that he will canonize an additional person on October 14 along with Blessed Paul VI and Blessed Oscar Romero.

He will be canonized along with Blessed Pope Paul VI and Blessed Oscar Romero and four others:

Blessed Francesco Spinelli, diocesan priest and Founder of the Institute of the Sister Adorers of the Blessed Sacrament, who born in Milan (Italy) on 14 April 1853 and died at Rivolta d’Adda (Italy) on 6 February 1913.

Blessed Vincenzo Romano, diocesan priest, who was born at Torre del Greco (Italy) on 3 June 1751 and died there on 20 December 1831.

Blessed Maria Caterina Kasper, Foundress of the Institute of the Poor Handmaids of Jesus Christ who was born on 26 May 1820 in Dernbach (Germany) and died there on 2 February 1898.

It is fitting that Nunzio Sulprizio, who died at the age of 19, be canonized during the Synod whose theme is Young People, the Faith and Vocational Discernment. Now with the addition of Blessed Nunzio, the canonization will include people from every walk of life: clerical, religious and lay.

Blessed Nunzio was born in Pescosansonesco in Italy in April of 1817. He lost both of his parents while still a child and was brought up by an uncle. His uncle exploited him, not allowing him to go to school, and forcing him to work in his blacksmith shop. Regardless of extreme cold or intense heat, he was forced to carry enormous weights over great distances. He found refuge before the Tabernacle where he would keep Jesus company.

After contracting gangrene in one of his legs, he was sent to a hospital for people with incurable diseases in Naples. He suffered tremendously on account of the pain. Yet, he is known to have said such things as:

Jesus suffered so much for us and by his merits we await eternal life. If we suffer a little bit, we will taste the joy of paradise.

Jesus suffered a lot for me. Why should I not suffer for Him?

I would die in order to convert even one sinner.

When asked who was taking care of him, he would respond: “God’s Providence”.

Once he got better, he dedicated himself to helping other patients. But his health took a sudden turn for the worse. He died from bone cancer in May of 1836 before he reached his 20th birthday.

Listen to our report

Pope Paul VI said the following when he beatified Nunzio on 1 December 1963:

Nunzio Sulprizio will tell you that the period of youth should not be considered the age of free passions, of inevitable falls, of invincible crises, of decadent pessimism, of harmful selfishness. Rather, he will rather tell you how being young is a grace… St. Philip used to repeat: Blessed are you, young people, who have the time to do good. It is a grace, it is a blessing to be innocent, to be pure, to be happy, to be strong, to be full of ardor and life –  just like those who receive the gift of fresh and new existence should be, regenerated and sanctified by baptism. They receive a treasure that should not be foolishly wasted, but should be known, guarded, educated, developed, and used to produce fruit for their own benefit and that of others. He will tell you that no other age than yours, young people, is as suitable for great ideals, for generous heroism, for the coherent demands of thought and action. He will teach you how you young people can regenerate the world in which Providence has called you to live, and how it is up to you first to consecrate yourselves for the salvation of a society that needs strong and fearless souls. He will teach you that the supreme word of Christ is to be the sacrifice, the cross, for our own salvation and that of the world. Young people understand this supreme vocation.