Learn to pray
Spirituality
Zlatko Dalic, is a man of sincere faith.
Croatia's World Cup soccer coach clings to the rosary as he finds success. 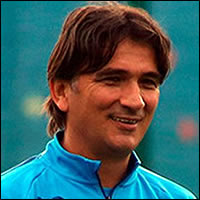 On Sunday, Croatia’s soccer team will play France in the championship game of the 2018 World Cup, after running victoriously through a string of soccer powerhouses in the tournament.

Here’s one reason Catholics in the US might be rooting for the small Central European country: Croatia is a deeply Catholic country, and the coach of its national team, Zlatko Dalic, is a man of sincere faith.

Dalic said recently that his current success is due to his faith in God, and that he always carries a rosary to hold onto in difficult times.

Dalic spoke about his faith on Croatian Catholic radio when the World Cup began.

“Everything I have done in my life and in my professional career I owe to my faith, and I am grateful to my Lord,” Dalic said.

Croatia got a ticket to the final match of the World Cup after defeating England 2-1 in a game that went to overtime July 11.

"I can be very happy with my life,” Dalic said, adding that "without strong faith and that motivation, it would be very difficult to achieve it."

"When a man loses any hope, then he must depend on our merciful God and on our faith," he said.

In that sense, Dalic explained that "I always carry a rosary with me" and "when I feel that I am going through a difficult time I put my hand in my pocket, I cling to it and then everything is easier.”

Regarding the expectations of the Croatians for the success of their selection at the 2018 World Cup in Russia, he indicated that "I know what our people expect, how many people love Croatian football and our team."

He stressed that “finding the good in life always brings satisfaction, happiness, a result. Man must always be honest with himself and with others. "

Before the July 11 game, Dalic said of his Cinderella-story team: “we do not fear anyone, not even England."

The coach is 51 years old, married and has two children. During his youth he played on Croatian soccer teams, among them Hajduk Split, Inter Zapresic and Varteks Varazdin.

In 2000, he finished his career as a professional soccer and started coaching Croatian teams. In 2010 he went to Saudi Arabia to lead the teams of Al-Faisaly Harmah and then Al-Hilal. A year later he moved to the United Arab Emirates to be the coach of the Al-Ain club.

In October 2017 he was appointed head coach of the Croatian national team.

This article was originally published by our sister agency, ACI Prensa. It has been translated, adapted, and updated by CNA.