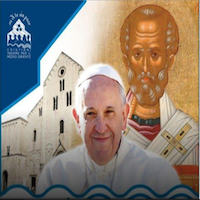 A press conference in the Vatican on Tuesday presented the visit of Pope Francis to Bari, Italy, on July 7, where he will join other Christian Church leaders in an ecumenical reflection and prayer for the suffering Christians of the Middle East.

Pope Francis is travelling on Saturday to the southern Italian Adriatic port city of Bari for an important ecumenical reflection and prayer with the heads and representatives of Christian Churches and Communities on the situation of Christians in Middle East.

“We will live a day of prayer and reflect on the increasingly dramatic situation of that region, where so many of our brothers and sisters in faith continue to suffer,” was how the Holy Father described his upcoming trip, speaking after his midday ‘Angelus” prayer on Sunday in St. Peter’s Square in Rome.

“With one voice will implore “Peace upon you!”  he said, urging all to pray for this pilgrimage of peace and unity.

The Pope’s ecumenical and peace initiative in Bari was presented at a press conference in the Vatican on Tuesday by Cardinal Kurt Koch, President of the Pontifical Council for Promoting Christian Unity and by Cardinal Leonardo Sandri, Prefect of the Congregation for the Oriental Churches.

Describing the Middle East as one of the regions of the world where the situation  of Christians is “most precarious”, Cardinal Koch said wars and persecution have forced families to abandon their homelands in search of security and better life.

The Swiss cardinal expressed alarm that the percentage of Christians in the region has “diminished drastically” in the span of just a century.   Where it was 20% of the population before World War I,  today, he said, it is just 4%”.

He pointed out that Ecumenical relations, especially between the Catholic and Orthodox Churches have been very “strong and promising” since the meeting between Pope Paul VI and Ecumenical Orthodox Patriarch Athenagoras in January 1964.

Citing Pope Francis the cardinal said that when they kill Christians, they don’t ask if they are Catholics, Orthodox or others.  They are killed only because they are Christians.

The situation in the Middle East, the cardinal said, is an “incentive for ecumenism” not only for Christians there, but also for the whole world.

No M.E. without Christians

With regard to the Middle East, Cardinal Koch spoke about 3 principles or convictions.  Firstly, peace and security are needed if Christians are to remain in the Middle East.

Thirdly, the rights of every person and minority regardless of religion, ethnicity or origin need to be guaranteed in the region.

Pope Francis chose Bari for this ecumenical prayer and reflection with leaders of Christian Churches, because the Adriatic port city is described as a "window to the East" where relics of St. Nicholas, venerated by both Catholics and Orthodox, are preserved.