Vatican
News
Fear sin, not death
Catholics have no reason to fear death, instead, they should fear sin. 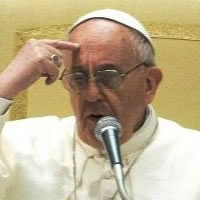 Catholics have no reason to fear death, because Christ the Lord has power over death; instead, they should fear sin, which hardens and kills the soul, Pope Francis said Sunday.

“Jesus is the Lord, and before Him physical death is like sleep: there is no reason to despair. A different [thing] is the death to be afraid of: that of the heart hardened by evil! Of that yes, we must be afraid!” the pope said July 1. “It is the death of the heart.”

“But even sin, even the mummified heart, is never the last word for Jesus, because He has brought us the infinite mercy of the Father.”

Francis explained that “even if we fell down, [Jesus’] soft and strong voice reaches us: ‘I tell you: get up’ It is beautiful to hear those words of Jesus addressed to each one of us: ‘I tell you: stand up! Go. Stand up, be brave, get up!’”

During his Angelus address, the pope reflected on how the words Jesus speaks in the day’s Gospel from Mark speak also to people today. In the passage, Jesus performs two miraculous healings: the hemorrhaging woman and the young daughter of a synagogue official.

In both cases, there is a singe center: faith, he said. “And they show Jesus as the source of life, as the one who gives back life to those who trust him fully.”

When Jesus and the disciples, as they walk to the house of Jairus, receive the message that the girl has already died, “we can imagine the dad’s reaction,” he said. “But Jesus tells him: ‘Do not be afraid, only have faith!’”

Everyone should strive to have this faith, Pope Francis said, and no one should ever feel they do not have a right to reach out to Jesus, just like the hemorrhaging woman.

To have access “to the heart of Jesus, there is only one requirement: to feel in need of healing and to entrust one’s self to Him,” he said.

Speaking off-the-cuff, the pope asked: “does each one of you feel in need of healing? [To be healed] of something, some sin, some problem?”

“And, if you hear this, do you have faith in Jesus? These are the two requisites to be healed, to have access to his heart: to feel in need of healing and to rely on Him.”

After praying the Angelus, Pope Francis spoke about several countries experiencing violence and conflict. He said he renewed his prayers for the people of Nicaragua, praising the the Nicaraguan bishops and people working to bring about mediation and national dialogue.

He also noted the situation in Syria, which he said, “remains serious,” especially in the province of Daraa, where recent military action has resulted in damage to schools and hospitals and created thousands of new refugees.

“I renew, together with prayer, my appeal that the population, already hard-tried for years, will be spared further suffering,” he said. The pope also guaranteed his prayers for the young people who have been missing in an underground cave in Thailand for over a week.

Francis added that “in the midst of so many conflicts,” it is also right to point out good news, noting that “after 20 years, the governments of Ethiopia and Eritrea have come back to talk about peace together.”

“May this meeting light a light of hope for these two countries of the Horn of Africa and for the entire African continent,” he said.

He concluded by mentioning his upcoming visit to the Italian town of Bari, where, with leaders of Christian Churches and communities in the Middle East, he will have a day of prayer and reflection on the situation in that region.

There “so many of our brothers and sisters in the faith continue to suffer, and we will implore [with] one voice: ‘Peace be upon you’ (Ps. 122:8),” he said. “I ask everyone to accompany this pilgrimage of peace and unity with prayer.”