Vatican
News
Christians are certain of Jesus’ identity
You are the Christ, the Son of the living God 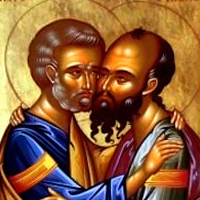 Speaking before the recitation of the Angelus on the Solemnity of Sts Peter and Paul, patrons of Rome, Pope Francis reflects on Jesus’ dialogue with Peter and the disciples regarding His identity.

On Friday, the Solemnity of Saints Peter and Paul (Matthew 16:13-19), Pope Francis used the Gospel of the liturgy in his reflection before the recitation of the Angelus. He said that the dialogue between Jesus and his disciples regarding His identity is one that continues to our day.

Pope Francis said that this Gospel episode is “fundamental for our journey of faith” because it demonstrates a crucial dialogue between Jesus and his disciples. With the first question, “Who do others say the Son of Man is”? (Mt 16:13), Jesus “seems to be saying that it is one thing to follow the current opinion”. With the second, “Who do you say that I am?” (Mt 16:15), Jesus is saying that it is another thing “to encounter Him and open oneself to His mystery”, Pope Francis said. We find the complete, rather than partial, truth, in that encounter. The Church still proclaims that truth today regarding Jesus’ identity: ““You are the Christ, the Son of the living God” (Mt 16).

Pope on feast of Sts. Peter and Paul: We cannot separate Christ’s glory from His cross

Down through the ages, Jesus has been defined in various ways, creating a “Babel of hypotheses”, Pope Francis continued. Peter’s confession stands out among the responses offered: “You are the Christ, the Son of the living God”. Grace gives our hearts the certainty that Jesus lives eternally just as the Father. It is the same certitude experienced by Christians, the Pope said.

Jesus’ response is illuminating: “You are Peter, and on this rock I will build my Church, and the gates of hell shall not prevail against it” (Mt 18). Pope Francis said that this is the first time that Jesus uses the word “Church”. “He does so expressing all His love for her, which He defines as ‘My Church’.” Jesus’ new Covenant community is based on faith in Him rather than on physical descent and on the mosaic law, he said

Prayer for the Church

Pope Francis concluded his remarks before the recitation of the Angelus asking that, through the intercession of Mary, Queen of the Apostles, that the Lord grant to the Church the grace of remaining faithful to the Gospel in whose service both Saints Peter and Paul “consecrated their lives".