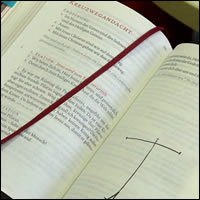 Did you know that there are three prayers in the Mass that, like the readings, are different for each Mass? It wasn’t until I had a recent conversation with my dad that I realized that I had been letting the words of these prayers wash over me without paying any attention to them. He told me that he had been making an effort to tune back into them again and he’d realized all the beauty he had been missing out on.

I absolutely love going to Mass, to worship and adore and to receive the greatest gift we’ve ever been given; the Eucharist. However, that doesn’t lessen the human struggle I face each time I go, that is, to remain attentive, and to put my whole heart and mind into the Mass that is being offered in front of me.

So it is always good to be reminded of the small, but no less important, parts of the Mass that we may be missing out on.

The three prayers I had regularly been zoning out on are the Collect, the Prayer over the Offerings, and the Prayer after Communion. They’re short prayers that the priest says before or after the “bigger” or more obvious parts of the Mass. They’re so short, and they often follow the same pattern, so the words can still feel familiar and therefore easier to inadvertently ignore. But they are always different! Which means that the Church, in her wisdom, has always prepared different words for her children, each time we are at Mass. Which means that each prayer has something important for us to receive in it, and if we miss it, it’ll be another rotation of the Church’s liturgical calendar before we hear it again!

The first of these prayers is The Collect:

The Collect forms the final part of the “Introductory Rites” of the Mass, which also include the Penitential Act, the Kyrie and the Gloria. The USCCB describes the praying of the Collect as follows:

“The Priest calls upon the people to pray and everybody, together with the Priest, observes a brief silence so that they may become aware of being in God’s presence and may call to mind their intentions. Then the Priest pronounces the prayer usually called the “Collect” and through which the character of the celebration finds expression. By an ancient tradition of the Church, the Collect prayer is usually addressed to God the Father, through Christ, in the Holy Spirit.”

Here are two examples of the Collect from Sundays in August and September 2017. They’re taken from the Universalis app.

“O God, who cause the minds of the faithful to unite in a single purpose, grant your people to love what you command and to desire what you promise, that, amid the uncertainties of this world, our hearts may be fixed on that place where true gladness is found. Through our Lord Jesus Christ, your Son, who lives and reigns with you in the unity of the Holy Spirit, one God, for ever and ever.”

“God of might, giver of every good gift, put into our hearts the love of your name, so that, by deepening our sense of reverence, you may nurture in us what is good and, by your watchful care, keep safe what you have nurtured. Through our Lord Jesus Christ, your Son, who lives and reigns with you in the unity of the Holy Spirit, one God, for ever and ever.”

In my humble opinion, these prayers are very beautiful and deserve our time and attention- maybe once we are home from Mass we can reflect more deeply on them. See how the language is very tender and warm as we prepare ourselves at the beginning of the Mass. They remind us of God’s fatherly care, while also encouraging us towards dignity and reverence as we start the Mass.

The Prayer over the Offerings

The penultimate part of the Mass is the Liturgy of the Eucharist, and it is during this part of the Mass, after the Offertory and before the Consecration, that the Prayer over the Offerings is said by the priest. The USCCB explains:

“Once the offerings have been placed on the altar and the accompanying rites completed, by means of the invitation to pray with the Priest and by means of the Prayer over the Offerings, the Preparation of the Gifts is concluded and preparation made for the Eucharistic Prayer.”

The Prayer over the Offerings reminds us that we are directly affected by the gifts that are brought to the Altar. It is a reminder that what is about to happen in the Consecration is very, very sacred, and not at all symbolic. It is the same sacrifice of His own self that Christ offered on Calvary, and we are about to experience it through the changing of bread and wine to His Body and Blood. Here are three examples of the Prayer over the Offerings. I have highlighted the lines that personally stand out for me. There is so much that is beautiful and truly awesome that is packed into such a short prayer! Look at what the priest is able to ask God on our behalf! Again, these prayers are taken from the Universalis app.

May this sacred offering, O Lord, confer on us always the blessing of salvation, that what it celebrates in mystery it may accomplish in power. Through Christ our Lord.

Receive our oblation, O Lord, by which is brought about a glorious exchange, that, by offering what you have given, we may merit to receive your very self. Through Christ our Lord.

O Lord, who gained for yourself a people by adoption through the one sacrifice offered once for all, bestow graciously on us, we pray, the gifts of unity and peace in your Church. Through Christ our Lord.

The Prayer After Communion

After the congregation have received Communion, “the Priest and faithful pray quietly for some time. If desired, a Psalm or other canticle of praise or a hymn may also be sung by the whole congregation. To bring to completion the prayer of the People of God, and also to conclude the whole Communion Rite, the Priest pronounces the Prayer after Communion, in which he prays for the fruits of the mystery just celebrated.” (USCCB.org)

The beautifully worded “Prayer after Communion” allows the priest to pray on our behalf that the Mass will not let us go unchanged, and that the gift of the Eucharist will take effect in our lives.

You’ll probably recognize some of the lines in these example prayers below, but have a reread and be refreshed on the beauty of their meaning:

Made partakers of Christ through these Sacraments, we humbly implore your mercy, Lord, that, conformed to his image on earth, we may merit also to be his coheirs in heaven. Who lives and reigns for ever and ever.

Complete within us, O Lord, we pray, the healing work of your mercy and graciously perfect and sustain us, so that in all things we may please you. Through Christ our Lord.

Renewed by this bread from the heavenly table, we beseech you, Lord, that, being the food of charity, it may confirm our hearts and stir us to serve you in our neighbor. Through Christ our Lord.

Perhaps, at an appropriate time after Mass, you could jot down on your phone or in a notebook the Prayer after Communion that you have just heard, and use it throughout your day or week as a reminder of what you have received at Mass, and what we are all called to do in serving others and bringing the Good News of Christ to all around us.

In writing this article I have wanted to simply remind and inspire those of us, myself included, who struggle to pay attention the whole way through Mass, to recollect the beauty of these individual prayers which can easily be lost in Liturgy. I hope that the next time you are at Mass you will be able to listen out more easily for them, to understand their purpose, and more readily absorb their meaning and beauty, despite their brevity.