Vatican
News
Commandments are path to freedom.
Pope Francis says the Commandments establish a dialogue between us and God. 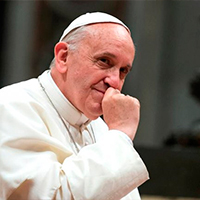 In his catechesis at the Wednesday General Audience, Pope Francis says the Commandments establish a dialogue between us and God, and set us on the path towards freedom.

Pope Francis began the Wednesday General Audience with a personal greeting to some 200 sick and disabled people gathered in the Paul VI Audience Hall. He told the pilgrims basking with him under the hot sun in St. Peter’s Square that the two groups form a single community.

Turning to his catechesis, Pope Francis continued his reflection on the Commandments, calling them “Ten Words for living the Covenant”. The Scriptures (Exodus 20:1), he said, do not call them “Commandments” but says “God spoke all these words.”

They are “objectively commandments”, the Pope said, but the difference between a word and a commandment is important.

He said a command doesn’t require a dialogue.

“The word, however, is an essential means for a relationship based on dialogue. God the Father creates through his word, and the Son is the Word made flesh. Love feeds on words, as does education or collaboration.”

In giving the Ten Words or Commandments, God continues his covenantal dialogue with His people, inviting them and us to shape our lives in a loving relationship with the Trinity.