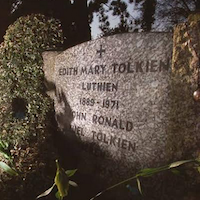 Among the tales of sorrow and of ruin that come down to us from the darkness of those days there are yet some in which amid weeping there is joy and under the shadow of death light that endures. And of these histories most fair still in the ears of the Elves is the tale of Beren and Lúthien.

J.R.R. Tolkien’s shares a glimpse of his view on human love in a single chapter of The Silmarillion: “Of Beren and Lúthien”.  This story is central not just to Tolkien’s writings, but also to his personal life.  He tells us his in letter of 11 July 1972 about the story’s inspiration:

I never called Edith Lúthien — but she was the source of the story that in time became the chief part of the Silmarillion, It was first conceived in a small woodland glade filled with hemlocks at Roos in Yorkshire … In those days her hair was raven, her skin clear, her eyes brighter than you have seen them, and she could sing — and dance. But the story has gone crooked, and I am left, & I cannot plead before the inexorable Mandos.

Tolkien writes after his wife’s passing and we can feel the sadness seeping through his words.  On their gravestone, “Lúthien” is beneath Edith’s name, and when Tolkien died almost two years later, his children had “Beren” engraved beneath his.

The Lord of the Rings references this story more than any other and there are a number of parallels in the plot structure.  Sam even tells us that he and Frodo are “in the same tale still!”

So seeing how central this story was for Tolkien, we can indicate several aspects central to his view on love and romance.

First of all, Beren is not worthy of Lúthien.  He is a mortal man, she an elf and daughter of a king.  Thingol, Lúthien’s father, despises mortals so much that he allows none of them to enter his kingdom and his first reaction to Beren is to try and arrest him as a criminal.

Under the spell of her beauty, Beren falls in love with her at first sight and she with him.  For him, her love is life-giving light that dispels the darkness in him.  Beren calls her Tinúviel, which means daughter of twilight.  She is light for him, yet mixed with shadows: beauty deepened by suffering.  Here, as in most other of Tolkien’s love stories (Aragorn and Arwen, Túor and Idril, Galadriel and Celeborn… and even Thingol and Melian!) men have the tendency to marry up.  Nothing Beren can do will make him worthy, and being loved in return is pure grace.  The difference is not so much in power or social status as in who the other person is in herself—Eve is the last and highest point in God’s creation.  The man must ask for her hand because it is he who asks the favor, he who begs the boon.

Secondly, Beren’s love must be purified.  When he first declares his love for her in Thingol’s court, he says: “I have found what I sought not indeed, but finding I would possess for ever. For it is above all gold and silver, and beyond all jewels. Neither rock, nor steel, nor the fires of Morgoth, nor all the powers of the Elf-kingdoms, shall keep from me the treasure that I desire. For Lúthien your daughter is the fairest of all the Children of the World.”

Beren loves Lúthien as one loves an object, a treasure that he will do anything to possess.  She must be his, no matter the cost.  This love of possession is similar to the love the elves (and Morgoth) feel for the Silmirils, and the price Thingol sets for his daughter is precisely to bring him one of those jewels for which kingdoms have been destroyed and the elves have been exiled from their true home.

Thingol also loves Lúthien with a possessive love, and when he finds out she wants to leave and help Beren on his quest, he tries to lock her in a house high in the trees.  She ceases to sing and fill the land with her joy, for she has placed all her happiness in Beren.  But she slips away.

After Lúthien heals Beren (yet again), he tries to leave her as she sleeps because he knows his quest is dangerous and wants to protect her.  He rides off, fully expecting to die, and sings a song about Lúthien:

for ever blest, since here did lie

and here with lissom limbs did run

Though all to ruin fell the world

and were dissolved and backward hurled

unmade into the old abyss,

yet were its making good, for this—

the dusk, the dawn, the earth, the sea—

that Lúthien for a time should be.

Here we see that Beren has grown and now no longer desires to possess Lúthien as a treasure, but loves her for her own sake: it is simply good that she is and he will gladly die for her sake (he has already taken an arrow for her and later will fling himself between her and Carcharoth in her moment of vulnerability).  Possession is not the issue any more.  And if he will fight for her, it will be for her happiness, which is where he has placed his own.

Of course, Lúthien catches up with him and insists on accompanying him for the rest of the quest.  And from that moment they work together in communion, in harmony—just as the songs they had sung to find each other previously.  Precisely because she is not a possession, Beren doesn’t have to keep her locked away safely while he does everything himself.  As we read on, we see how essential communion is for success.

Thirdly, we learn that human love cannot be lived in isolation, but should contribute to the greater good, follow a higher calling.  Tolkien notes a failed case at the start of the chapter: that of Gorlim, a member of an outlaw band led by Beren’s father.  Gorlim’s wife has disappeared, and he is captured by Sauron (at the time, Morgoth’s chief servant), who uses a vision of his wife to lure Gorlim into a trap.  Sauron offers to free him and reunite him with his wife if he will betray the rest of the band.  He agrees and through his information everyone in the band except Beren is killed. Sauron reveals that Gorlim’s wife is dead and kills Gorlim, thus sending him to be with her.  Gorlim’s fatal mistake is to pursue his love through treachery and disloyalty.  Yet for Tolkien, human love is not the absolute end, independent of any further moral binding.

Beren is faced with the same choice.  He has made an oath to win Lúthien’s hand by bringing Thingol a Silmaril.  His choice is between fidelity that means risking loosing Lúthien forever and immediate happiness through ignoring his vow.

Then Beren took thought of his vow; and against his heart he resolved, when Lúthien was come again within the safety of her own land, to set forth once more. But she was not willing to be parted from him again, saying: You must choose, Beren, between these two: to relinquish the quest and your oath and seek a life of wandering upon the face of the earth; or to hold to your word and challenge the power of darkness upon its throne. But on either road I shall go with you, and our doom shall be alike.

Beren is the one who must make the choice to fulfill the vow, for he is the one who made it.  Lúthien will stay with him no matter what.  Beren must choose at two separate moments in the story: once to go on and complete the quest, and once to return to Menegroth with Lúthien after they have taken and lost a Silmaril.  Beren’s choice to be faithful to his vow implies obeying a higher plan that has been guiding him all this time.  He had been able to enter Doriath right before finding Lúthien because “a great doom lay upon him.”

As an aside, Tolkien uses the word “doom”  in its original sense: a judgement or a choice.  It implies both fate, or a divine plan, and human freedom to cooperate with that plan.  A greater doom guides them, yet Beren and Lúthien are free to say yes in their love or not.  By following the higher call to sacrifice, their love is completed through being placed in a greater love, their plans in a greater plan.

This doom, Tolkien tells us, leads to the fulfillment of the quest (as when the eagles rescue them—success can’t be achieved alone), and in the big picture, to Beren and Lúthien becoming ancestors of generations of kings and heroes.  Their fidelity matters.

Continuing with the  story, Lúthien gets them past Carcharoth and lulls Morgoth to sleep while Beren cuts a Silmaril from Morgoth’s crown of iron.  Each constantly entrusts their life to the other, and the quest ends when Carcharoth is killed and a dying Beren hands the Silmaril to Thingol.

Finally, Tolkien paints for us the necessary sorrow that comes with parting and death.  Yet he insists on a love that transcends the tragedy.  Lúthien pleads for Beren’s  life with Mandos, keeper of the Houses of the Dead—but her song is not just of personal sorrow, but that of both elves and men: “The song of Lúthien before Mandos was the song most fair that ever in words was woven, and the song most sorrowful that ever the world shall ever hear.”  Beauty won through suffering, love deepened in sorrow—no other beauty and no other love can compare.

Mandos grants them life, but by marrying Beren, Lúthien herself takes on the mortal life of men, and both will eventually die.  While elves live forever in this world, men die and no one knows what happens to them afterwards.

The only way to make sense of love’s painful brevity is that there is something beyond death; their love leads them to transcendence: “that thus, whatever grief might lie in wait, the fates of Beren and Lúthien might be joined, and their paths lead together beyond the confines of the world.”

Romance is grace, unselfish love, harmony, fidelity, light that gives meaning to sorrow and hope that will not give way to despair.  Tolkien himself lived these ideals and invites his readers to do the same.  As he says elsewhere in another love story, “In sorrow we must go, but not in despair. Behold! we are not bound for ever to the circles of the world, and beyond them is more than memory.”