Vatican
News
Pope Francis praying for victims of Guatemala volcano
The Pope said he is praying for the eternal repose of the deceased . 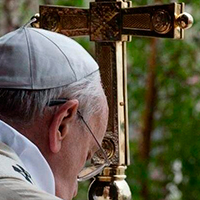 In a telegramme addressed to the Apostolic Nuncio in Guatemala Pope Francis has assured his prayers for those killed, injured and displaced following the eruption of a volcano.

Pope Francis said he is praying for the dead and for all those affected by a powerful volcanic eruption in Guatemala in which at least 69 people have died.

A telegramme addressed to Archbishop Nicolas Thevenin, the Apostolic Nuncio in Guatemala by Vatican Secretary of State, Cardinal Pietro Parolin on behalf of the Pope, said Francis was “deeply saddened to learn of the news of the violent eruption of the Volcano of Fire, which has claimed numerous victims, caused enormous material damage and affected a significant number of people who live in the area”.

In it the Pope said he is praying for the eternal repose of the deceased and conveys his condolences to family members mourning the loss of their loved ones.

He also assured his closeness to the wounded and to those who are “working tirelessly to help the victims while asking the Lord to “bestow upon them all the gifts of solidarity, spiritual serenity and Christian hope”.

Meanwhile Guatemalan authorities confirmed the death toll from Sunday’s eruption of the Volcano of Fire at 69, but said only 17 of the dead have been identified so far.

Over 3,000 people have been forced to flee their homes in the region south-west of the capital, Guatemala City where the local Caritas organization has set up three camps for the displaced, and organized a collection for the 10 June, during which medicine, clothes and food will be accepted and distributed.

Caritas Guatemala on the ground

According to the Executive Secretary of Caritas Guatemala aid workers have been unable as yet to reach some of the most populous areas of the affected region and he fears the scenario could be even more catastrophic.

“One million seven hundred thousand people are affected, and that number could rise – he said – there is serious damage to infrastructure, especially roads and bridges, so communications are very difficult.”