Vatican
News
Love knows how to find the good
Pope Francis received Giorgio, Rosita and Davide Barolini, along with other members of the “Una Vita Rara” association. 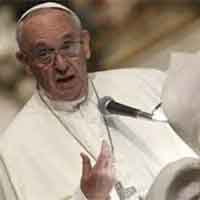 Pope Francis greets representatives of “Una Vita Rara” in the Vatican’s Sala Clementina. He praises the dedication of two parents of a boy living “a rare life”.

Pope Francis expressed his admiration for Giorgio and Rosita, founders of “Una Vita Rara”, and other families in similar situations. Rather than focusing on the negative aspects of having a son with a chronic disease, “you felt a desire within you to do something for him and for others affected by a rare disease”, he told them.

The Pope also commented on the name they chose for their association. “It says a lot. It says that you know how to look at the positive”, he said. That positive outlook “is a typical ‘miracle’ of love. Love does that. It knows how to find the good even in a negative situation”, he went on to say. In addition, love is always open to others and open to creating solidarity, the Pope said.

Giorgio and Rosita founded “Una Vita Vera” in 2016 after receiving a diagnosis regarding their son Davide in 2015. They waited almost twelve years for that diagnosis. Their son was suffering from a rare thyroid malfunction caused by a gene mutation called Allan Herndon Dudley Syndrome (ADHS). Without proper diffusion of thyroid, nerve cells are unable to develop properly. Underdevelopment of the muscles and the brain causes those living with AHDS to experience physical and intellectual disabilities.

Through their website and Facebook page, the Barolini’s have formed a network, keeping people informed with what they are learning about ADHS and what research is being undertaken.

The Rare Words Run: Road to Rome initiative was created in order to raise awareness of the foundation and to sustain research for ADHS. Long-distance runner, Luca Sala, ran the 700 km from the Birolini home in Monticelli Brusati to Rome. He arrived on April 29, the day before the Pope received “Una Vita Vera” in audience..