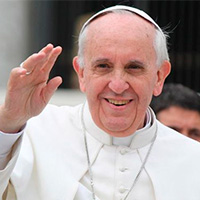 Pope Francis has sent a video message to hundreds of Spanish men and women religious who are taking part in a meeting in the capital Madrid.

The encounter, organized by the national theological institute for religious life, opened on Thursday and runs through Sunday April 8th, focusing on the theme of young people discerning vocations to consecrated life.

In the message sent to the head of the theological institute, Fr Carlos Martìnez Oliveras, Pope Francis says he fears that young people are losing sight of their roots. He notes that the background to the meeting is the lack of vocations to religious life in Spain today.

But the Pope adds: “we cannot limit ourselves to complaining” or simply surround ourselves with “regrets for past glories, when the Lord tells us to look ahead and see what we have to do”.

The goal of the meeting is to reflect on the forthcoming Synod of Bishops on young people and vocations, focusing especially on the calling to religious life. Among those addressing the encounter are Cardinals Carlos Osoro Sierra and Oscar Rodrìguez Maradiaga, as well as the secretary of the Congregation for Religious Life, Archbishop José Rodrìguez Carballo and the head of the Taizé community, Brother Alois.

In the message, Pope Francis says it is important to avoid proselytising, seeking instead “to open ways for the Lord to speak and to call” young people.

Above all, the Pope says, we must avoid “electoral campaigning” or “advertising campaigns” because “God’s call does not work through marketing models”.

Pope Francis urges Spain’s religious to be courageous and to help young people recover their roots, so that “your sons and your daughters shall prophesy, your old men shall dream dreams”.

More than ever today, the Pope concludes, it is necessary to re-establish an inter-generational dialogue between the young and the elderly, between grandparents and grandchildren. We must listen to the concerns of the young and the old, he says, while praying and witnessing, leaving the number of vocations in the hands of the Lord.