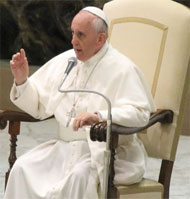 On Easter Monday, Pope Francis encouraged Christians to celebrate Easter with their community of family and friends, taking time to renew the brotherhood and sisterhood that is a fruit of the Lord’s resurrection.

“Today is a day of celebration and conviviality usually lived with the family, it is a day of the family. After celebrating Easter, we feel the need to reunite with our loved ones and with friends to party,” the Pope said April 2.

This is because fraternity is the fruit of Christ’s death and resurrection, he explained, when Jesus “defeated the sin that separated man from God, man from himself, man from his brothers.”

“It is so important in our time to rediscover fraternity, just as it was lived in the early Christian communities,” he continued.

Pope Francis gave his message before leading pilgrims in praying the Regina Coeli from a window overlooking St. Peter’s Square.

It is customary for the Pope to lead this traditional Marian prayer on the Monday following Easter Sunday, also sometimes called the “Monday of the Angel” for the angel who announced Christ’s resurrection to the women at the tomb.

During the 50 days of Easter, the Regina Coeli will also replace the usual recitation of the Angelus on Sundays.

Pope Francis explained that the first announcement that Christ was alive, that he had risen from the dead, was made by an angel, and that “it took a superior being to communicate a reality so shocking, so incredible, that perhaps no man would dare to pronounce it.”

But after this first announcement, then the community of disciples began to repeat the words of the angel. “This announcement is beautiful, we can all say it together now: Truly the Lord is risen!” the Pope added off-the-cuff.

He said that the fraternity we share in during these days “is a grace that Jesus gives,” and without fraternity, there can be no “true communion and a commitment to the common good and social justice.”

He noted that “Jesus said: ‘From this everyone will know that you are my disciples: if you have love for one another.’”

“This is why we cannot withdraw ourselves into our private life, into our group,” he said, “but we are called to take care of the common good, to take care of our brothers, especially the weakest and most marginalized.”

“Only fraternity can guarantee lasting peace, can defeat poverty, can extinguish tensions and wars, can eradicate corruption and crime.”

Concluding, Francis wished everyone an Easter Octave filled with serenity and joy; and encouraged Christians to take “every opportunity to witness the peace of the risen Lord, especially in regard to the most fragile and disadvantaged.”

“Don’t forget what was said to the first Christians: Truly, the Lord is risen!”

“May the Virgin Mary, whom we invoke with the title of Queen of Heaven at this Easter time, support us with her prayer, so that the fraternity and communion we experience in these Easter days can become our style of life and the soul of our relationships,” he said.