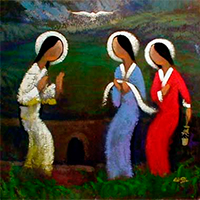 That very day, the first day of the week, two of Jesus’ disciples were going to a village seven miles from Jerusalem called Emmaus, and they were conversing about all the things that had occurred. And it happened that while they were conversing and debating, Jesus himself drew near and walked with them, but their eyes were prevented from recognizing him. He asked them, "What are you discussing as you walk along?" They stopped, looking downcast. One of them, named Cleopas, said to him in reply, "Are you the only visitor to Jerusalem who does not know of the things that have taken place there in these days?" And he replied to them, "What sort of things?" They said to him, "The things that happened to Jesus the Nazarene, who was a prophet mighty in deed and word before God and all the people, how our chief priests and rulers both handed him over to a sentence of death and crucified him. But we were hoping that he would be the one to redeem Israel; and besides all this, it is now the third day since this took place. Some women from our group, however, have astounded us: they were at the tomb early in the morning and did not find his body; they came back and reported that they had indeed seen a vision of angels who announced that he was alive. Then some of those with us went to the tomb and found things just as the women had described, but him they did not see." And he said to them, "Oh, how foolish you are! How slow of heart to believe all that the prophets spoke! Was it not necessary that the Messiah should suffer these things and enter into his glory?" Then beginning with Moses and all the prophets, he interpreted to them what referred to him in all the scriptures. As they approached the village to which they were going, he gave the impression that he was going on father. But they urged him, "Stay with us, for it is nearly evening and the day is almost over." So, he went in to stay with them. And it happened that, while he was with them at table, he took bread, said the blessing, broke it, and gave it to them. With that their eyes were opened and they recognized him, but he vanished from their sight. Then they said to each other, "Were not our hearts burning within us while he spoke to us on the way and opened the scriptures to us?" So, they set out at once and returned to Jerusalem where they found gathered together the Eleven and those with them who were saying, "The Lord has truly been raised and has appeared to Simon!" Then the two recounted what had taken place on the way and how he was made known to them in the breaking of the bread.

Introductory Prayer: Lord, you are the source of all life because you are life itself. Your resurrection gives me the hope of being raised from the dead to rejoice with you forever in heaven. I need to dwell more often on the good you have done for us and on your promises to those who put their trust in you. Thank you, Jesus, for taking up your life again and leading the way home to heaven. I love you, and I want to follow after you with all my heart. I want to cooperate more fully with you in bringing many others there with me.

Petition: Lord Jesus, walk by my side. Open up my person to the meaning of Scripture and the events of life. Make my heart burn within me with your words .

1. It is Over: These two disciples had been badly shaken by the events of the last few days. They had courageously left home and family to follow the Lord. They had listened to his words, witnessed his miracles, and even generously gone out and preached in his name. They had expected Jesus to be the longed-for Messiah. And it was precisely at the moment Jesus referred to as “his hour”, when he was accomplishing his greatest work, that these disciples broke with Jesus. What went wrong? God worked in a way and with a power these disciples had not expected, and which they did not accept. The cross and suffering had not entered into their plans. A gloriously triumphant path, they could accept, but not a crucified Lord. As long as there were miracles, encouraging crowds and the high of emotion, following Christ was their thing. But when the Cross cast its shadow, they threw in the towel. And so, they are on their way back home, back to their old lifestyle, hopes shattered and faces downcast. Their conversation was a self-pitying reconstruction of events, without faith, without a sense of God, sunken in their own sorrow.

2. Intrusion by an Innocent Bystander: The two disciples are so centered on their own woes and wounds that they do not recognize who walks alongside them. Feeling sorry for ourselves does not help us go to God, but only immerses us further in our own impotence. What breaks through this situation? An unexpected question that destroys the incorrect assumptions of these two malcontents and invites them to look more deeply at their own situation. Reflection on the obvious, on the real events of our life (and not our own broken, limited plans and hopes) is what begins to open the door to a reborn hope. What are you talking about? Why? Did you fail to grasp something?

3. Sharing our Bread with a Stranger: Christ is the shepherd that seeks out these two, stray sheep. As always, he masterfully and gently enlightens their consciences and leads them to the truth. Listening to Christ prepares these two disciples to recognize him when he takes, breaks, blesses and gives them “bread” – the same actions of the Last Supper. After recognizing Our Lord in the “breaking of the bread”, their entire dispositions change. Even their way of assessing events and situations changes. They had stopped for the evening, but after experiencing the Lord, they raced out in the middle of the night to share their experience with the others.

Conversation with Christ: Lord Jesus, teach me detachment from self, and acceptance of your glorious plan. Walk always by my side, and help me realize that as long as I am in conversation with You, even without my realizing it, there is always hope and salvation.

Resolution: I will let God break my own limited plans and expectations. I will talk to Christ about what goals he wants me to set for my life, impossible though they may seem.