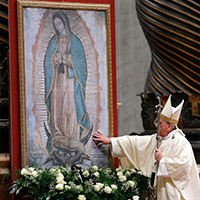 On the occasion of Pope Francis' 5th anniversary, the statistics gathered by the Holy See’s Press Office helps us reflect on the importance of his Papacy.

On 19 March, 2013, the Solemnity of St Joseph, Pope Francis celebrated Mass inaugurating his pontificate. Since then, the 81 year old pontiff has certainly left his mark on the Church. The statistics put together by the Holy See’s Press Office (see below) give us but an outline of Pope Francis’ papacy.

In the footsteps of John Paul II and Benedict XVI

Pope Francis has demonstrated that he is continuing in the footsteps of both John Paul II and Benedict XVI. The themes of both synods – the Family and young people – were very dear to John Paul II. And both Encyclicals have connections with Benedict XVI. The first, Lumen Fidei, is based on a manuscript begun by Pope Benedict and concludes his Encyclicals on Faith, Hope and Charity. The second, Laudato Si’, not only cites Pope Benedict numerous times, but also treats a recurring theme from Pope Benedict’s pontificate.

But Pope Francis is also leaving his own mark on the Papacy, one which is rooted in his formation and pastoral experience in Argentina. The creation of a special Council of Cardinals to assist him in the reform of the Roman Curia is a concrete example of the collegiality that Pope Francis embraces.

Perhaps most remarkable of all is the Pope’s affable and affectionate personality which shines through every public and personal encounter with him. Francis is a Pope who enters into the everyday lives of people with phone calls and letters, with “Good evening”, “enjoy your lunch”, and “please don’t forget to pray for me.”

Themes of the Wednesday Catechesis

The Gifts of the Holy Spirit

Pastoral visits to the parishes of Rome: 16

Special Synod on the Amazon (October 2019)

World Day of fasting and prayer for Peace I: Syria (7 September 2013)

World day of prayer for creation: 1 September (inaugurated in 2015)

World day of the poor: 23rd Sunday of Ordinary Time (inaugurated in 2017)

Sunday of the Word: One Sunday during the Liturgical Year (inaugurated in 2017)

Consistories for the creation of Cardinals

Pope Francis has created a total of 61 cardinals. Of these, 49 are electors and 12 are non-electors (one of whom has subsequently died)

Pope Francis has canonized a total of 880 saints, 800 of whom are the Martyrs of Otranto

9 canonization ceremonies in the Vatican