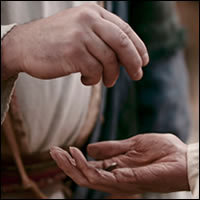 One of the Twelve, who was called Judas Iscariot, went to the chief priests and said, "What are you willing to give me if I hand him over to you?" They paid him thirty pieces of silver, and from that time on he looked for an opportunity to hand him over. On the first day of the Feast of Unleavened Bread, the disciples approached Jesus and said, "Where do you want us to prepare for you to eat the Passover?" He said, "Go into the city to a certain man and tell him, 'The teacher says, "My appointed time draws near; in your house I shall celebrate the Passover with my disciples."'" The disciples then did as Jesus had ordered and prepared the Passover. When it was evening, he reclined at table with the Twelve. And while they were eating, he said, "Amen, I say to you, one of you will betray me." Deeply distressed at this, they began to say to him one after another, "Surely it is not I, Lord?" He said in reply, "He who has dipped his hand into the dish with me is the one who will betray me. The Son of Man indeed goes, as it is written of him, but woe to that man by whom the Son of Man is betrayed. It would be better for that man if he had never been born." Then Judas, his betrayer, said in reply, "Surely it is not I, Rabbi?" He answered, "You have said so."

Introductory Prayer: Lord Jesus, I wish to accompany you closely on the road to Calvary.  If I were to contemplate you more often as you hang scourged and bloody upon the cross, I’m certain I would be able to rest in your love and base my actions on that one truth. I know that you have loved me with an eternal love: you have proven it there on the wood of the cross. So, I long to respond with gratitude, peace and the firm determination to spread your love to everyone.

Petition: Lord Jesus, help me to stay strong in my faith.

1. One of the Twelve a Traitor? We often think that Judas must have been different, obviously worse than the other disciples. If that were true, everyone would have suspected him when Jesus said, “One of you will betray me.” They would have thought: “It must be Judas. He’s always been bad. He’s capable of betraying Jesus. I don’t know why Jesus picked him.” Instead, Judas did not stand out as any worse than they were. If he did, they would have immediately suspected him. Each one of us, as well, could become a Judas little by little, first by giving up our principles on smaller matters and then later on more important matters. In the Christian life there always needs to be a healthy tension of straining forward and of watchfulness. The one who is trustworthy in small matters is trustworthy in greater matters.

2. Is It I? The apostles are all asking, “Is it I?” Why? Was there some widespread desire to betray him of which they were barely keeping control? No, but they were in a very dangerous situation. The Pharisees had decided to kill Jesus. The apostles know it. That’s why the whole group had gone to stay in Jericho for a while. Jerusalem was too dangerous. They can imagine themselves following Jesus to the Temple the next day, being singled out in the crush of the crowd and then having their life threatened to provide information about where Jesus can be found at night. They wonder what they would say. With my life on the line, would I betray Jesus? This is why they ask, “Is it I?” When push comes to shove, what comes first in my life? Would I ever consider selling out on Jesus for something or someone else?

3. Vigilance of the Heart: Judas had everything he needed to be a great apostle. He had a magnanimous heart, which is why Jesus picked him. God never destines anyone for failure. So, what happened to him? At some point he stopped working on his friendship with Jesus. Some would point to the moment of the discourse on the Bread of Life recorded in John 6. Judas couldn’t accept that he needed to eat Jesus’ body and drink his blood. Jesus must be wrong, and therefore he is a false Messiah. John 6:64 tells us that Jesus knew who his betrayer would be. Jesus gives Judas a chance to leave the group and remain an honest man in John 6:67. Instead, he stays, becoming a hypocrite – a “devil” in Jesus’ words – and begins the path that will lead to betrayal. Knowing that my faith is the most precious gift I have received from God, do I watch over and nourish my faith so that it grows and is strong?

Conversation with Christ: Lord, I have betrayed you so many times, even when I do such a simple thing as not saying grace in a restaurant out of fear that others will realize I am a Catholic. May the experience of your Passion and death help me to have the courage to live by my convictions at all times.

Resolution: Today I will live all the demands of my faith, especially in the moments when they point me out as a follower of Christ. Today I will not betray him, even in the smallest way.