Daily Gospel
Liturgical Cycle B
Whoever is not With Me is Against Me
John 11:45-56 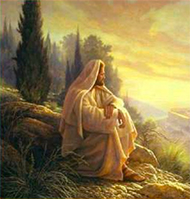 Many of the Jews who had come to visit Mary and seen what he had done began to believe in him. But some of them went to the Pharisees and told them what Jesus had done. So, the chief priests and the Pharisees convened the Sanhedrin and said, "What are we going to do? This man is performing many signs. If we leave him alone, all will believe in him, and the Romans will come and take away both our land and our nation." But one of them, Caiaphas, who was high priest that year, said to them, "You know nothing, nor do you consider that it is better for you that one man should die instead of the people, so that the whole nation may not perish." He did not say this on his own, but since he was high priest for that year, he prophesied that Jesus was going to die for the nation, and not only for the nation, but also to gather into one the dispersed children of God. So, from that day on they planned to kill him. So, Jesus no longer walked about in public among the Jews, but he left for the region near the desert, to a town called Ephraim, and there he remained with his disciples. Now the Passover of the Jews was near, and many went up from the country to Jerusalem before Passover to purify themselves. They looked for Jesus and said to one another as they were in the Temple area, "What do you think? That he will not come to the feast?"

Introductory Prayer: Lord, you are life and truth and goodness. You are also peace and mercy. How grateful I am to have this moment to turn to you. Without you I can do nothing good. In fact, when I do good, it is you working through me, despite my failings. Thank you, Lord. Here I am ready to love you more.

Petition: Help me to see your will, Lord, above and beyond my own will and my own plans.

1. No Middle Ground: Today’s Gospel opens with the response to Jesus’ raising of Lazarus from the dead. Some eyewitnesses of the miracle believed in him, but others did not; in fact, they went to “pour fuel on the fire” with the adversaries of Christ who were seeking a reason to condemn him. Here we see the mystery of human freedom at work. The overt action of God in our lives obliges us, in a certain sense, to move to either side of the truth. To what side of the truth am I moved when I sense the manifest action of God at work in my life, in the voice of my conscience, or in the lives of others? Does it help me to believe ever more deeply in Christ?

2. Is it All About Power? Why did the Pharisees so oppose the message and action of Jesus? One way of looking at the problem is to see it as the natural consequence of the human tendency toward control – even the control of things spiritual. The religious authorities of Christ’s time no doubt saw themselves as the custodians of the faith handed down to them by their forefathers. But it seems that slowly this custody became control. The authorities become less interested in the legitimacy of Jesus’ identity, message and mission and more interested in maintaining the established religious and political order. Yet even their resistance is incorporated into God’s plan. Their rejection leads Jesus to die for the nation, “and not only for the nation, but also to gather into one the dispersed children of God.” How much do I try to control God’s action in my life?

3. Willingly Embracing the Father’s Will: We can only imagine the inner thoughts and feelings of Christ as the events leading to his suffering and death begin to unfold, just as he knows they will. Instead of resisting the Father’s plan, we see Christ serene and composed as the tension builds. We see his sense of determination and decision increase. He is fully committed to the Father’s will. Jesus teaches us the wisdom of letting go of circumstances that are fully within the Father’s purview. He teaches us to embrace the divine will with total trust and serenity, no matter how difficult it may be for us.

Conversation with Christ: You know, Lord, what is best for me because you are my Father, immensely good, inclined towards me, attentive to my pleas, eager to give me the body of your Son ever present in the great mystery of your Eucharist.

Resolution: I will embrace with faith what I cannot – and should not – control.