Daily Gospel
Liturgical Cycle B
The Royal Official’s Request for a Miracle
John 4:43-54 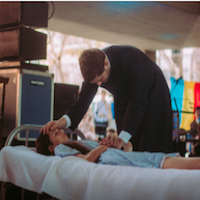 At that time Jesus left Samaria for Galilee. For Jesus himself testified that a prophet has no honor in his native place. When he came into Galilee, the Galileans welcomed him, since they had seen all he had done in Jerusalem at the feast; for they themselves had gone to the feast. Then he returned to Cana in Galilee, where he had made the water wine. Now there was a royal official whose son was ill in Capernaum. When he heard that Jesus had arrived in Galilee from Judea, he went to him and asked him to come down and heal his son, who was near death. Jesus said to him, "Unless you people see signs and wonders, you will not believe." The royal official said to him, "Sir, come down before my child dies." Jesus said to him, "You may go; your son will live." The man believed what Jesus said to him and left. While he was on his way back, his slaves met him and told him that his boy would live. He asked them when he began to recover. They told him, "The fever left him yesterday, about one in the afternoon." The father realized that just at that time Jesus had said to him, "Your son will live," and he and his whole household came to believe. Now this was the second sign Jesus did when he came to Galilee from Judea.

Introductory Prayer: Father, I come before you with faith, hope and love. I will give my best effort to be attentive to your grace and inspiration during this time of prayer.

Petition: Lord, help me to have greater fortitude and faith.

1. No Prophet Has Honor in His Native Place: Pay careful attention to how St. John the Evangelist introduced this saying of Jesus. “At that time Jesus left Samaria for Galilee. For Jesus himself testified that a prophet has no honor in his native place.” If Jesus knew there were no honors awaiting him in Galilee, why not go somewhere where the reception would be better? Jesus is trying to give us an example: he is not interested in “honor”, but rather in carrying out the mission. He is the Prophet par excellence. He himself is the message the Father has for humanity, and personal considerations will not keep him from his appointed task. We must be committed in our own personal mission, whether or not we can expect to be honored, or even appreciated. Our purity of intention is a good thermometer for following Christ.

2. Signs and Wonders: Jesus does the miracle, but not without reminding everyone that true faith cannot simply be based on “signs and wonders.” Why is this? Perhaps what Jesus is criticizing is the jaded religious outlook that can experience the presence of the divine only in the spectacular, while failing to perceive it in the quiet and small ways that God makes his presence known. With deeper faith, we can see God all around us. That beautiful sunset – isn’t it a masterpiece of God’s creative power on display? The unexpected apology – wasn’t that the working of grace? That helping hand stretched out to us just when we needed it – wasn’t that Christ in our midst? The person whose faith doesn’t need “signs and wonders” is precisely the person who sees so many more signs and wonders – the everyday, loving presence of the Lord.

3. “He and His Whole Household Came to Believe.” No grace given is strictly personal, just between “me and Jesus.” Everything is meant to radiate beyond the individual to build up the entire body of Christ. The royal official received the miracle he requested, but afterwards it wasn’t simply a return to business as usual, now that his son was back in action. Indeed, the healing was the occasion for something far bigger: “His whole household came to believe.” This grace has borne abundant fruit. At the outset, our Lord had remarked about the lack of honor given to the native son-prophet. This entire family and household coming to faith is the confirmation that sacrificing honor is more than compensated by saving souls.

Conversation with Christ: Lord Jesus, what joy this family’s conversion must have given to your heart! Their faith was a marvelous sign of the efficacy of your grace. Help me to have greater faith, to see you present in the small and big things of life, and to draw others closer to you.

Resolution: Like the royal official, I want to help my family to have a deeper faith. I will bring up a spiritual topic at family dinner and try to encourage a more faith-filled perspective.