Indigenous Peruvian seminarian eager to see Pope Francis
Come to preach the Word of God or evangelize, teach that we are all children of God, as Christians. 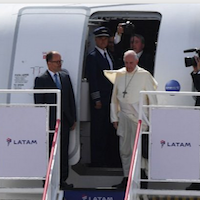 Demetrio Sanchez, a 20-year-old indigenous Peruvian seminarian, is eager to see Pope Francis when he visits Puerto Maldonado on Thursday.

“I want to be a priest. That's why I came here to Puerto Maldonado to have an experience of how the priestly vocation is lived out, and to see if I could go on to be a priest, since right now there are no priests [in my village]. That's why I want to become  a priest,” Sanchez told ACI Prensa, CNA's Spanish language sister agency.

Since he began his formation “my life has changed a lot,”  Sanchez added.

It takes Sanchez three days by river and roads to travel from his community of Tangoshiaria to Saint John Marie Vianney Seminary, where he studies.

“It certainly is a long journey, but of course when he was invited to come to the seminary he came with high hopes,” said Fr.  Carlos Alberto Castillo Flores, the seminary’s rector.

Sanchez is motivated by the witness of the life of Bishop David Martinez, the Apostolic Vicar of Puerto Maldonado, “who had worked in his area, where Demetrio is from,” Castillo said.

“Perhaps motivated by his example and seeing the need for priests--there are no priests now in his community--he felt inspired to come here to the seminary and hopes to become a priest, God willing, in the future,” he said.

Sanchez told ACI Prensa that priests “come to preach the Word of God  or evangelize, teach that we are all children of God, as Christians.” In addition, they support the needy and show “how to live in the family,” he added

Sanchez studies at a minor seminary, where students study philosophy before beginning theology at a major seminary.  The minor seminary is “basically to instill in them the desire to embrace priestly life,” Castillo explained.

Sanchez does not hide his enthusiasm for the Pope’s visit to Puerto Maldonado on Jan. 19.

“I really want to see the pope,” he said, since “a pope is a holy father, a messenger who seeks Christian unity, he's a teacher. That's why I want to see a pope, who is the head of the Church.”

Castillo has praised Sanchez’ pastoral initiative. When he was on on vacation “he held a Liturgy of the Word, there in his community (…) and he came back here with great enthusiasm saying: 'Father, I called together my community. My community participated in Liturgy of the Word.' This was in his own dialect, Ashaninka-Matsigenka, and he's very motivated.”

Pope Francis is visiting Peru from Jan. 18-21. Thursday he will travel to the Apostolic Vicariate of Puerto Maldonado, where Sanchez studies.

There are about 332,000 indigenous Peruvians living in the country’s Amazon region, of which 29,000 are within the Apostolic Vicariate of Puerto Maldonado