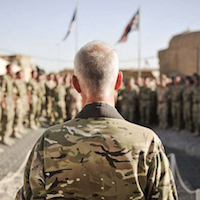 As military veterans and victims of violence are treated for psychological trauma, the emotional wounds of missionaries and military chaplains might be overlooked, but are just as present.

And with mass shootings, suicides, and acts of terrorism on the rise, more and more first responders like policemen, firemen, hospital workers, and clergy will “continually bear the brunt” of experiencing these horrors.

That's according to Monsignor Stephen Rosetti, a psychologist and former president of the St. Luke Institute, who spoke to CNA.

“The priests are helping others, and the question is who helps them?” he asked.

Monsignor Rosetti is the former head of the St. Luke Institute in Silver Spring, Md., an organization that provides psychological care for priests and religious in need of treatment for mental illness, addiction, and other disorders.

Part of the institute’s ministry is helping military chaplains and missionaries who have served in war-torn areas, but also religious who have ministered to victims of trauma at home – amidst events like natural disasters and mass shootings.

Military chaplains suffering from Post-Traumatic Stress Disorder or other mental illnesses related to their ministry shared their struggles with the Washington Post last year. Repeatedly serving as a listening ear for the dark problems of soldiers, combined with experiencing the horror of battlefield combat and seeing the dead bodies of friends, can take its toll on a priest’s psyche.

“Just about all” priests and religious returning from a war-torn areas will need “some sort of support,” Monsignor Rossetti noted, like a “detoxing” in their transition from a stressful environment to life back in the U.S.

However, a few will require special attention, he said. These are cases where someone has experienced a particularly appalling atrocity or ongoing violence or stress, “almost too much for the human soul to bear.”

“I think especially of missionaries who are in violent areas,” he said, those who have witnessed “mass murders” or “unbelievable poverty and disease.”

For any clergyman traveling to a poor or war-torn area, “we try to train them as best we can to deal with such trauma” before they depart, the monsignor said, “but sometimes the situation is just so horrible that there’s a real human toll to it.”

Trauma – inflicted especially through acts of terrorism, mass shootings, and suicides – is on the rise, he said. The suicide rate in the U.S. is the highest in decades; the number of mass shootings are also on the rise.

Catholics cannot act as if the first responders like parish priests or military chaplains won’t be affected, he insisted. We must “help train them” to deal with trauma, he said, noting the need for “qualified laypeople” in fields like psychology.

Also, he added, “I think we shouldn’t isolate our chaplains.” Rather, we should be working to connect “first responders” like police, emergency medical technicians, hospital nurses and priests, who can talk about their experiences with each other and “support each other,” he said.

Tragedies can make or break someone’s faith, he added. If a person who has experienced trauma is treated with professional psychological care and a network of support, it can help sustain one’s faith and not break one’s spirit.

“Unspeakable sufferings do challenge our faith, and in times when our faith is a little bit too glib, it kind of bashes that and challenges it,” he admitted. “So these kind of events really challenge us to move deeper into the Lord’s passion and eventually, hopefully, His resurrection.”

“It can build up your faith in a new, deeper way, or sadly sometimes people lose their faith.”