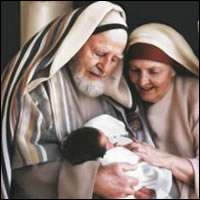 When the time arrived for Elizabeth to have her child she gave birth to a son. Her neighbors and relatives heard that the Lord had shown his great mercy toward her, and they rejoiced with her. When they came on the eighth day to circumcise the child, they were going to call him Zechariah after his father, but his mother said in reply, “No. He will be called John.” But they answered her, “There is no one among your relatives who has this name.” So they made signs, asking his father what he wished him to be called. He asked for a tablet and wrote, “John is his name,” and all were amazed. Immediately his mouth was opened, his tongue freed, and he spoke blessing God. Then fear came upon all their neighbors, and all these matters were discussed throughout the hill country of Judea. All who heard these things took them to heart, saying, “What, then, will this child be?” For surely the hand of the Lord was with him.

Introductory Prayer: Lord, as I humbly kneel before you in prayer, I recognize your power and glory. Without you, I am nothing, but with you I can do all things. With this trust, I implore you to help me make good use of this time of prayer as an expression of my deep desire to love and imitate you. I am here to please and glorify you.

Petition: Lord, help me to appreciate more deeply the role of parents and families as domestic churches.

1. Amazing Grace: Elizabeth and Zechariah received the great grace of a child in their old age. And not just any child: he was John the Baptist. To ready him for his great vocation, he would need the love and guidance that are unique to parents. Great people often trace their path from the love of a mom or dad (frequently both), who might remain hidden from the world. Am I grateful to my parents for what I received from them? Am I regularly seeking what is truly best for my spouse and children and not just what seems best in the eyes of the world?

2. God’s Call: The child would not be named after his father, but rather would receive the name God chose. The great tension in the life of a child (and sometimes an adult) is the close identity they have with a parent ― or with a parent’s plans for their life. In truth, our identity rests in our heavenly Father. God alone gives us meaning and a vocation in life. Could there be expectations of a parent or other family member that hold me back from God’s plan for me? Or, if I am a parent, do I unjustly impose my plans on my children? Do I interfere in their vocation? In their marriage?

3. Zechariah’s “Yes”: Zechariah’s voice returns only after he acquiesces to God’s plan and agrees to the child’s name. When we finally say “yes” to God in our life, that’s when we find the deepest meaning of our lives. That’s when we can express ourselves the best. Am I keeping God waiting?

Conversation with Christ: Lord, Zechariah took a long and winding road on his path over nine months. Let me see my own life as a path, and have patience with those who are still on their path.

Resolution: Today, I’ll say “yes” to one thing that God has been asking of me.