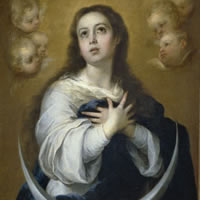 On Friday’s Feast of the Immaculate Conception, Pope Francis offered his own ‘beauty secret’ – with Mary as model – saying beauty does not come from age or appearance, but from living a virtuous life rooted in scripture.

The Blessed Virgin Mary, though a simple and humble person, “lived a beautiful life,” the Pope said Dec. 8, asking “what was her secret?”

The answer can be found in the story of the Annunciation, he said. “In many paintings, Mary is depicted sitting in front of the angel with a small book. The book is scripture.”

“The Word of God was her secret: close to her heart, it then took flesh within her womb. Remaining with God, dialoguing with Him in every circumstance, Mary made her life beautiful.”

In his special Angelus address for the feast day, Pope Francis emphasized that what makes someone’s life beautiful is “not appearance, not what passes, but the heart focused on God.”

Francis noted how Mary came from a simple family and lived in a humble fashion in Nazareth, which was an almost unknown village. She was not famous. “Our Lady did not even have a comfortable life,” he said. Yet the angel greets her with the words, “hail, full of grace!”

The Church extols the Mother of God as “all beautiful,” or “tota pulchra,” in Latin, the Pope continued. This is because her beauty is not found in her outward appearance, but in her total freedom from sin.

“There is only one thing that really does grow old: not age, but sin,” he emphasized. “Sin makes (us) old, because it fossilizes the heart. It closes it, makes it inert, it makes it fade. But the (woman) full of grace is empty of sin.”

Let us ask for her help to remain free of sin, he concluded, so that we too can live a beautiful life, saying “yes,” to God.

After reciting the Angelus, Pope Francis noted how later in the afternoon he will visit Rome’s Piazza di Spagna to venerate the statue of the Immaculate Conception overlooking the Spanish Steps.

He asked those gathered to join him spiritually in this act, “which expresses filial devotion to our heavenly Mother.”

The statue of Our Lady, which sits atop a nearly 40-foot-high column, was dedicated Dec. 8, 1857, just a few years after the Catholic Church adopted the doctrine of Mary’s Immaculate Conception. Since the 1950s, it has been a custom for popes to venerate the statue for the Feast of the Immaculate Conception.

The statue is usually adorned with homages of flowers hung in the form of wreaths around Mary’s outstretched arms and laid at the base of the statue. Early in the morning Dec. 8, firemen placed a large wreath of white and yellow flowers upon Mary’s arm, reaching the statue with the ladder from a firetruck.

During his visit Pope Francis will place flowers at the base of the statue and recite a short prayer to Our Lady, made on behalf of the people who live in Rome.

After the visit to Piazza di Spagna, the Pope is scheduled to stop at the Basilica of Saint Mary Major, where he will venerate the image of Our Lady Salus Populi Romani.