Vatican
Jerusalem, “a special vocation for peace.”
Pope Francis noted how Jerusalem is a “unique city” that is considered holy for Jews, Christians and Muslims. 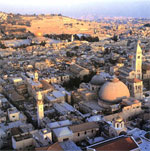 With debate on the status of Jerusalem heating up in the wake of U.S. President Donald Trump's controversial decision to recognize the city as the capital of Israel, Pope Francis has urged international leaders to proceed with prudence and respect for current U.N. resolutions.

“My thought now goes to Jerusalem. In this regard, I cannot ignore my deep concern for the situation that has been created in recent days,” the Pope said Dec. 6.

He issued a “heartfelt appeal” to the international community to ensure that “everyone is committed to respecting the status quo of the city, in accordance with the relevant Resolutions of the United Nations.”

The position of the U.N. on the Jerusalem issue is that East Jerusalem is occupied Palestinian territory, and that the city should eventually become the capital of the two states of Israel and Palestine.

Pope Francis spoke to pilgrims in the Vatican's Paul VI Hall during his weekly general audience, during which he recounted the phases of his recent Nov. 27-Dec. 2 trip to Burma, also called Myanmar, and Bangladesh.

His appeal for Jerusalem comes shortly after news came out that U.S. President Donald Trump would be recognizing Jerusalem as the capital of Israel – a widely controversial decision that has provoked a mixed reaction from the international community.

As part of the plan, the Trump administration is expected to eventually move the U.S. embassy from Tel Aviv to Jerusalem, and while Israel welcomes the changes, both Palestinians and Arab leaders have voiced concern that the move could jeopardize the peace process in the Middle East, according to BBC.

Debate on the issue is in many ways the crux of the conflict between Israel and Palestine, which is backed by Arab leaders, including Saudi Arabia, and the wider Islamic world.

According to the 1993 Israel-Palestinian peace accords, the final status of Jerusalem will be discussed in the late stages of the talks. Israeli sovereignty over Jerusalem has never been recognized by the international community, and all countries have embassies in Tel Aviv.

Recognizing Jerusalem as Israel's capital, then, is likely to increase tension on the issue, particularly in regards to the 200,000-some settlements Israel has built in East Jerusalem, which are considered illegal under international law, though Israel disputes this stance.

In his general audience, Pope Francis noted how Jerusalem is a “unique city” that is considered holy for Jews, Christians and Muslims. Because of this, he said the city has “a special vocation for peace.”

“I ask the Lord that this identity be preserved and reinforced for the benefit of the Holy Land, the Middle East and the entire world, and that wisdom and prudence prevail to avoid adding new elements of tension in a global panorama already convulsed and marked by so many cruel conflicts,” he said.

Prior to his general audience, the Pope met with a Palestinian delegation of religious and intellectual leaders for a scheduled audience, urging dialogue that is respectful of everyone's rights in the Holy Land. He also voiced his hope that “peace and prosperity” would prevail for the Palestinian people.

On his trip to Burma and Bangladesh, Francis said it was “a great gift from God,” and thanked the civil authorities and bishops of each country for their welcome and for everything they did to prepare for the trip.

He noted how his Nov. 27-30 visit to Burma marked the first time a Pope has ever traveled to the country, which took place just months after the Holy See established full diplomatic relations with the nation in May.

“I wanted, also in this case, to express the closeness of Christ and of the Church to a people that has suffered due to conflict and repression, and which now is slowly walking toward a new condition of freedom and peace,” he said.

Burma, a majority Buddhist country where minorities, including Christians, often face stigma and discrimination, is still working to transition to a democratic government after more than 50 years of military rule, while also facing harsh criticism from the international community over what the United Nations has called a “textbook case of ethnic cleansing” of Rohingya Muslims from the country's Rakhine State.

In this context, Christians there are the “leaven of God,” he said, and called the Church in Burma a “living and fervent” community that he had the joy of meeting and affirming in faith and communion.

Similarly, he said his Nov. 30-Dec. 2 visit to Bangladesh was equally important, and focused largely on the need for “respect and dialogue” between Christianity and Islam, as the country is a majority Muslim nation with a small Catholic community.

Religious freedom was a major theme, and was reflected in each of his meetings, he said, and underlined the importance of “openness of the heart as the basis for the culture of encounter, harmony and peace.”