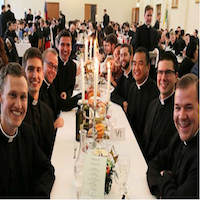 Seminarians studying at the Pontifical North American College in Rome have a lot to be thankful for come Thanksgiving Day. Among them is their community, and also for home-baked pumpkin pie, made by their fellow students, the fifth-year student priests of the college.

Fr. Kevin Ewing, a newly-ordained priest of the Archdiocese of Baltimore, is the leader of this year’s seven intrepid volunteers, who during two afternoons before Thanksgiving will assemble and bake 90 pumpkin pies, to be eaten at the NAC’s annual Thanksgiving dinner on Thursday.

Situated atop Janiculum hill overlooking the Vatican, the campus is home to roughly 250 seminarians and priests studying in Rome for the Church in the U.S., Canada and Australia, as well as numerous faculty members and graduate students.

Since the students aren’t able to return home for the holiday, they try to make it a big community event, especially for seminarians who may be experiencing their first time away from home for a holiday.

Fr. Daniel Hanley, a priest of the Diocese of Arlington, VA and the director of admissions for the college, told CNA that his favorite part of the festivities “is the spirit that's engendered here among the men.”

During a time usually associated with family, it can be difficult for some students to be away from home, he said, but “the whole spirit of the house is a desire to make the day good for each other.”

And the fifth-year students baking the pies? That’s gone on a long time, something Hanley remembers as already a part of long-established tradition when he was a student in Rome in the early 2000s.

This year’s seven priests have limited baking acumen, but “as long as there’s enough people there willing to lend a hand and follow the recipe and watch the oven it’ll come out alright,” Ewing said.

Part of the tradition also includes the fifth-year priests, and transitional deacons not returning to Rome the following year, serving the dinner, Ewing explained: “It’s a way of giving back to the community in a way that we’ve received now for four or five years.”

On Thanksgiving, the day’s festivities will begin around 6 am with a newer development, the NAC’s very own 5k “Turkey Trot,” which starts at the college, and winds around the outside of the Vatican, before returning, uphill, to the seminary.

“Its claim to fame is it's the only Turkey Trot to go around a sovereign nation,” joked third-year seminarian Michael Buck.

An Australian, studying for the Archdiocese of Melbourne, Buck will be celebrating only his third Thanksgiving this year. He said that “discovering the tradition” has definitely been one of the great joys of being at the seminary.

Following the run, seminarians will meet back in their halls to enjoy a leisurely breakfast together before preparing for the noon Mass, which is “the center of our day,” stated Hanley.

The big meal will follow, including guests and friends from around Rome, especially American expats. Another tradition is for seating to be arranged according to home state, tables adorned with state-themed décor, such as sports jerseys or a papier-mâché cactus.

The Australian students – there are five – usually sit at a table together, but have decided this year to spread themselves out among the Americans, Buck said, as a way of more fully integrating into the holiday.

The dinner, which “captures most the festive atmosphere of the day,” according to Buck, will be a traditional American dinner in most ways – complete with turkey and mashed potatoes with gravy. But because they’re still in Rome, a dish of ravioli will provide an Italian twist.

After dinner there will be some free-time, and students often use that opportunity to make video calls home to their families.

Fr. Hanley noted that one of his favorite memories of Thanksgiving Day was walking into the chapel after dinner one year to offer a personal prayer of thanksgiving, and finding more than 100 seminarians praying before the Blessed Sacrament.

“It wasn’t an event, it was just that all these other men decided to go in and pray… and give thanks on Thanksgiving,” he said.

The final event of the holiday weekend will be the “Spaghetti Bowl,” an annual flag football match between a team of “new men” of the seminary, first-year and new transfer students, and a team of upperclassmen, nicknamed the “old men.”

A lot of the weekend is designed, Hanley said, to strengthen “the bond of the new men class – with each other – and then to strengthen their bond as members of this community.” Though most people would want to be home for Thanksgiving if they could, he noted that most seminarians seem to look forward to the weekend.

As an Aussie, Buck also wanted to offer his own gratitude for the holiday and getting to participate, saying he shares his own “thanksgiving for being able to share in Thanksgiving.”