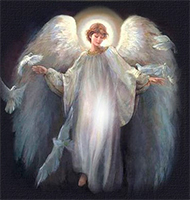 In both New Age spirituality and Christian fundamentalism, belief in angels is very high. However, in contemporary mainstream Christianity (including Catholicism), belief in angels has fallen on hard times. Many Christians no longer believe in angels and find the idea of such creatures no more than a lovely myth. Angels seem to be out of place in a rational, scientific world.

But, as John Macquarrie, the distinguished Anglican theologian, has pointed out, it is strange that modern people would close their minds to the possibility of angels. In a world of space exploration, we are learning more and more about the inconceivable vastness of space and the infinite proliferation of worlds beyond our own. At the scientific level, we are more and more open to the possibility of life on other planets.

Surely, modern people, then, should be open to the notion that God has created other orders of beings beyond those who live on earth.

In Macquarrie’s words, “The panorama of creation must be far more breathtaking than we can guess in our corner of the cosmos, for there must be many higher orders of beings whose service is joined with ours under God.” The doctrine of angels tell us that human beings live in a universe created by God that is infinitely more wondrous than we know.

St. John Chrysostom wrote, “The whole sanctuary and the space before the altar is filled with heavenly powers come to honor Him who is present on the altar.” Believers, he says, have been judged worthy “to join the powers of heaven in singing the praises of Him who is Lord of all.”

The Catholic funeral liturgy provides two beautiful antiphons referring to the angels. The first reads: “May the angels lead you into paradise; may the martyrs come to welcome you and take you to the holy city, the new and eternal Jerusalem.” The second proclaims: “May choirs of angels welcome you and lead you to the bosom of Abraham; and where Lazarus is poor no longer, may you find eternal rest.”

The Church’s teaching on angels tells us that all creation is called into existence in a communion of life and mutual service. The angels exist not as hostile and dangerous creatures. The unknown world is not full of evil and horrible creatures of which we should be fearful. Angels are called into being to love God and humanity. Because angels dwell in it, the invisible and mysterious universe is lovingly disposed toward us.

Finally a complaint: If the angels are present at the liturgy, why in modern church buildings have they been expelled from iconography and statuary? Out of sight, out of mind!