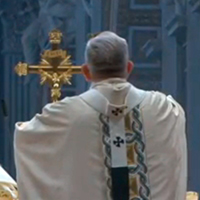 On Tuesday Pope Francis voiced his sorrow after 26 people were killed at a Baptist Church in Texas over the weekend, offering his support and praying that such acts of meaningless violence would come to an end.

In a Nov. 7 telegram signed by Vatican Secretary of State Cardinal Pietro Parolin, Pope Francis said he was “deeply grieved by news of the loss of life and grave injuries” caused in Sunday's shooting at a Baptist church in Texas.

Francis condemned the “senseless violence” and offered his “heartfelt condolences” to the families of the victims and wounded, members of the congregation and the local community.

He closed the letter, addressed to Archbishop Gustavo Garcia-Siller, Archbishop of San Antonio, by praying that the Lord would “console all who mourn and to grant them the spiritual strength that triumphs over violence and hatred by the power of forgiveness, hope and reconciling love.”

The Pope's telegram comes just two days after at least 26 people were killed when a gunman opened fire at the First Baptist Church in Sutherland Springs, Texas. Sutherland Springs is a small town located about 35 miles southeast of San Antonio.

At least 20 others were taken to the hospital after the shooting, which police believe was motivated by a domestic dispute.

After the shooting, the gunman fled the scene, and was later found dead in his car by police. The shooting marked the latest in a series of similar incidents throughout the United States in recent months, and is the deadliest on record in the State of Texas.

In a message after the event, Archbishop Garcia-Siller offered his condolences and support, saying “We need prayers! The families affected in the shooting this morning at the First Baptist Church in Sutherland Springs need prayers.”

“The evil perpetrated on these who were gathered to worship God on the Lord’s Day – especially children and the elderly – makes no sense and will never be fully understood,” he said, adding that there are no adequate words for the “disbelief and shock” produced by the deadly affair.

“There can be no explanation or motive for such a scene of horror at a small country church for families gathered to praise Jesus Christ,” he said, adding that “these Baptist brethren are our family, friends and neighbors who live among us in the archdiocese … We are committed to work in unity with all our brothers and sisters to build peace in our communities; to connect in a more direct and substantial way. The Catholic Church in Texas and across the United States is with you.”