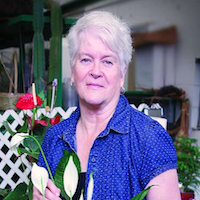 When Barronelle Stutzman took a stand for her Christian beliefs four-and-a-half years ago, she never imagined that she would eventually be appealing to the US Supreme Court to defend her decision.

But that’s exactly what happened.

“This was never on my bucket list,” Barronelle told CNA.

The 72-year-old grandmother is the owner of Arlene’s Flowers in Richland, Washington, and is currently involved in a lawsuit involving a customer of nearly 10 years, Rob Ingersoll.

Barronelle knew Rob was gay from the beginning. “It was never an issue,” she said. She enjoyed working with him, and said he would pick out creative vases and containers, and would come in with flower requests for birthdays, anniversaries, and other special occasions.

“I loved doing arrangements for Rob, because I got to think outside of the box, and do something special for him.”

But when Rob came in and told Barronelle that he had gotten engaged to his boyfriend, she took him by the hand and explained that she believed marriage to be a sign of the relationship between Christ and the Church, and so she could not do the floral arrangements for a same-sex wedding.

Initially, Rob said that he understood and asked if she could recommend another florist, which she did.

Later, however, his partner posted a message on social media about Barronelle declining to take part in the wedding, and it went viral. Soon, she was informed that she was being sued by the Washington State attorney general and the ACLU. Today, more than four years later, Barronelle is waiting to hear whether the US Supreme Court will take her case.

And while the actual damages being sought by the couple are only around $7 – the mileage cost of driving to another florist – Barronelle could be responsible for more than $1 million in legal fees to nearly a dozen ACLU lawyers opposing her in the case.

Barronelle, who is Southern Baptist, spoke at a Nov. 1 panel discussion in New York City, hosted by ADF International, the global branch of the non-profit legal group that is representing her in court.

The panel discussed Australia’s ongoing marriage referendum and the threats to religious freedom that accompany a redefinition of marriage to include same-sex couples.

“Because I have a belief that is marriage is between one man and a woman, we could possibly lose everything we own, everything we’ve saved for our kids and grandkids,” Barronelle said.

She explained that while the decision to decline a same-sex wedding was difficult, it was the only way she could stay true to her beliefs. For her, weddings are much more than simply a job – they’re a deeply personal labor of love, and she pours her heart and soul into her work.

“I spend months – sometimes years – with the bride and groom. I get to know them personally, what they want to convey, what the bride wants, what her vision is. There’s so much personal involvement in this.”

At the wedding, Barronelle will often help greet guests and calm nervous parents. “When we get the bride down the aisle, then I know I’ve done my job,” she said.

With floral arrangements for weddings being such a personal endeavor, she knew that she would be betraying her relationship with Christ if she participated in a same-sex wedding ceremony.

Over the last four-and-a-half years, Barronelle has received an outpouring of support – customers coming in to offer a kind word or a hug, strangers telling her they are praying for her family, and messages of encouragement from 68 countries.

But she’s also received death threats. She’s had to install a security system and change her route to work.

“Even today, were very aware of people who come in who might do us harm,” she said.

Also hard, she said, has been losing her relationship with Rob. She said she misses him and harbors no anger against him.

“I can tell you that if Rob walked into my store today, I would hug him, catch up on his life, and I would wait on him for another 10 years if he’d let me.”

She also has a message for her fellow Americans: stand up for religious freedom, before it’s too late.

“Don’t think this cannot happen to you,” she said. “I never thought that we would have a government that would come in and tell you what to think, what to do, what to say, what to create – and if you don’t do it, you’ll be totally destroyed.”

“If we don’t stand now, there will be nothing to stand for.”