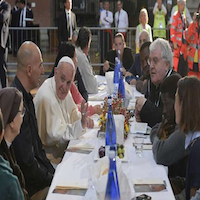 They were supposed to be having lunch with Pope Francis.

During his Oct. 1 trip to Bologna, the Holy Father was scheduled to dine with 20 prisoners from a local drug rehabilitation facility, along with refugees and the poor of the area, during a “Lunch of Solidarity” at San Petronio Basilica.

Instead, two of the Italian prisoners shirked their invitation for what they saw as a prime opportunity for escape.

According to Bologna newspaper Il Resto del Carlino, the prisoners escaped sometime during the hour, though it is unclear whether they first ate lunch.

They have yet to be found.