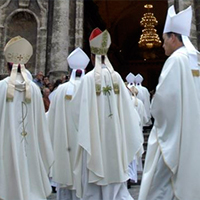 On Thursday Pope Francis named Fr. Enrique Delgado, who has a background in economics, as an auxiliary bishop for the Archdiocese of Miami, making him the first Peruvian bishop in the United States.

Previously holding the position as pastor of the Miami's Saint Katherine Drexel Parish in Weston, Delgado will serve under Miami's Archbishop Thomas Wenski. His appointment as bishop was announced in an Oct. 12 communique from the Vatican.

In addition to being the first Peruvian bishop in the U.S., Delgado is the 14th auxiliary bishop to serve South Florida's Catholic community since the Miami diocese was created in 1958. It became an archdiocese in 1968.

Born in Lima, Peru in 1955, Delgado studied at the University of Lima and in 1982 obtained a Masters Degree in Economics, with an emphasis in Finance and Accounting.

He worked as a manager for a number of years in Peru before eventually came to the United States and entering seminary for the Miami Archdiocese, undergoing studies in the in the Saint John Vianney College Seminary of Miami and later in the Saint Vincent de Paul Seminary in Boynton Beach.

After completing his studies in 1996, he was ordained a priest for Miami the same year. Delgado served as pastor of several parishes after his ordination, including St. Agnes Parish in Key Biscayne, Nativity Parish in Hollywood, Saint Justin Martyr Parish in Key Largo and finally Saint Katherine Drexel Parish in Weston, where he has been stationed since 2010.

The bishop-elect continued his studies while serving as a priest, and obtained his doctorate in Practical Theology from Saint Thomas University in Miami Gardens in 2015.

In an Oct. 12 press release from the Archdiocese of Miami, the diocese said they are “proud” to have Delgado on board.

He will officially be introduced by Archbishop Wenski during a 10a.m. press conference at the Archdiocese of Miami's pastoral center. His episcopal ordination will take place Thursday, Dec. 7, at Miami's St. Mary Cathedral, with Archbishop Wenski presiding.