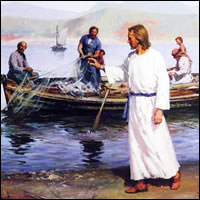 When the days for Jesus to be taken up were fulfilled, he resolutely determined to journey to Jerusalem, and he sent messengers ahead of him. On the way they entered a Samaritan village to prepare for his reception there, but they would not welcome him because the destination of his journey was Jerusalem. When the disciples James and John saw this they asked, "Lord, do you want us to call down fire from heaven to consume them?" Jesus turned and rebuked them, and they journeyed to another village.

Petition: Lord Jesus, make me meek and humble of heart.

1. An Unpopular Strategy: Jesus was like the general of an army. His wasn’t a visible enemy, though; his enemy was the hidden forces of evil itself. Jesus waged war on the devil until the bitter end. “This was the purpose of the appearing of the Son of God, to undo the work of the devil” (1 John 3:8). Jesus marched on toward Jerusalem, and this Gospel described his march with a military term: “resolutely”. Nevertheless, even though he was engaged in fierce combat, Jesus didn’t show it in a way the world understood. Our Lord approached his battle in Jerusalem like a sheep being led to the slaughter. His strategy was humility. Humility was the atomic bomb that he would drop on Satan’s designs and plans. He thus undid the pride and arrogance of Lucifer.

2. A Lesson in Humility: St. John the Evangelist is an active participant in this passage. He himself knew that Jesus’ purpose was to wage war (see 1 John 3:8), and he and his brother dreamed of being well-decorated in Jesus’ battalion. They sought places at his right and left hand in the Kingdom (see Mark 10:35-37), and now they seek to use their rank as apostles to bring down revenge on their opponents. Jesus rebuked them, redefining for them the idea of kingship in his reign. They learned quickly that the weapons of attack were kindness, gentleness, charity and humility.

3. Mission Oriented: In military standards, a commander-in-chief might have considered the incident in Samaria a defeat. Christ was uprooted from their presence, so humanly speaking, he lost. This however, is not the case. Had Jesus complained or retaliated against the fanaticism of the Samaritans. T, that would have been a defeat. Instead, the Gospel tells us: “They journeyed to another village.” Simple as that! Christ won victory because he didn’t waste time on fickle, whimsical and capricious expectations; rather as a true soldier, he forgave, forgot and continued to the next town.

Conversation with Christ: Lord Jesus, allow me to understand the bumps and bruises of your “boot camp.” It is hard to understand why life is so taxing for my weak nature, but I know that we are at war with the forces of evil. Seeing you die for this war and winning it gives me greater courage to commit my bit to the war effort. Help me to prefer the virtue of humility over my pride.

Resolution: Today, I will be to the one who does an everyday chore in my house. I will make the coffee for all or wash the dishes to demonstrate to the Lord (and myself) that I can be humble.